You are using an outdated browser. Please upgrade your browser to improve your experience.
Digital Communicator
by Aldrin Calimlim
February 24, 2016

The latest update to Viber for iOS includes enhancements to chats.

More detailed information has also been added in group chats, allowing you to see who among the group chat participants have read and liked any message.

Viber has also been updated with improved search.

The new Viber update also adds additional support for 3D Touch. Previously, pressing the app’s icon on the home screen on an iPhone 6s or an iPhone 6s Plus brings up a shortcut for creating a new message. But now, there are 3D Touch shortcuts for accessing the three most recent chats. Still no 3D Touch support for Peek and Pop within the app itself, though.

Get Viber and more

Compatible with iPhone, iPod touch, and iPad running iOS 7.0 or later, the new version of Viber is available now on the App Store for free, with in-app purchases for additional call credits and sticker packs. 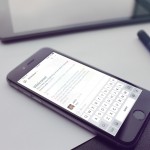 Slack for iOS updated for improved team communication
Nothing found :(
Try something else