You are using an outdated browser. Please upgrade your browser to improve your experience.
App Bargain Bin
by Tyler Tschida
August 16, 2016

Dish out the best coffee in the universe, create your own apps and games, and leap across the galaxy in search of stars with today’s collection of apps and games.

When addresses matter, look to mycl. It places a convenient widget within Notification Center that displays your current address and allows you to copy it or add it to your contacts. If you have an Apple Watch, you’re able to see the address of your current location and coordinates on your wrist.

mycl – my current location is available for free for a limited time. It has a 4-star rating with a total of 36 ratings.

Shoppylist – Grocery List ($0.99 → Free, 6.7 MB): Craft and share your grocery shopping lists right from your iDevice with this easy to use productivity app. It’s for anyone interested in going digital with their lists.

Just start typing and ShoppyList will suggest items using its built-in library. Add a colon right after your item name to attach a quantity or note. You’re also able to add items by browsing by type or recently added. You can mark items off your list while wandering around the store with a tap. ShoppyList also allows you to create multiple lists, duplicate lists, and share them via email, Messages, or AirDrop.

Shoppylist – Grocery List is available for free for a limited time. It has a 3.5-star rating with a total of 46 ratings.

Rotating planets are spread all throughout the galaxy. You must leap from one to another as quickly as possible while collecting stars to earn a high score. To leap, just tap anywhere on the screen. You’ll want to try and collect every star between each planet to create chains and increase your multiplier. Power-ups can also be found orbiting planets. The game includes loads of quests to complete, costumes to unlock, and leaderboards via Game Center.

Little Galaxy Family is available for free for a limited time. It has a 4.5-star rating with a total of 491 ratings.

Build and Play – Construction Play Scene ($0.99 → Free, 87.3 MB): Your child gets to build their own construction scenes and play memory games in Build and Play. Don’t worry, it’ll keep them busy.

Your child is able to populate their scene by dragging more than 30 different stickers into place. The stickers feature sound effects and simple animations. The memory games consist of the same charming characters and machines, and can be played with four, six, or 16 cards.

Build and Play – Construction Play Scene is available for free for a limited time. It has a 3.5-star rating with a total of 33 ratings.

War Dragons features a proprietary 3-D game engine that brings the giant beasts to life with vivid detail. As a dragon lord, it’s up to you to breed legendary dragons in order to round out your army. With more than one hundred unique dragons possessing different combat styles, spell abilities, and classes, you’ll have your work cut out for you. When it’s time to head into battle join forces with your friends and lay waste to the world below. War Dragons includes weekly multiplayer events to take part in, which can net you fantastic rewards like rare dragon eggs and treasures.

Dishing out coffee to thirsty customers in space isn’t easy, but someone has to do it. Your customers will always move from the green tile to the red along the blue conveyor belt. It’s your job to set up tables to attract the customers and build drone stations to deliver the goods. Some customers are more thirsty than others, so pay close attention to their thirst bars. You don’t want anyone leaving without their fill. The game includes more than 100 levels spread across five planets, powerful boosts, and fun pixel art.

Super Barista is available for free for a limited time. It has a 4-star rating with a total of 51 ratings.

hyperPad – Create Interactive Games Apps and Prototypes ($4.99 → Free, 53.2 MB): Create your own apps and games even without any programming or graphic design experience with hyperPad. It’s genuinely for anyone.

Whether you have a story to tell, a topic to teach, or just want to play some games on your iPad, you’ll have no problem jumping right in with hyperPad. Just drag and drop everything from characters to controls right onto your workspace and hyperPad will take care of the rest. You’re able to choose from hundreds of graphics, or you can create and import your own. The app also includes built-in music and sound effects, a full-featured physics engine, and interactive tutorials.

hyperPad – Create Interactive Games Apps and Prototypes is available for free for a limited time. It has a 4-star rating with a total of 93 ratings. 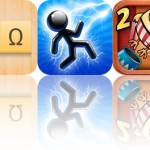 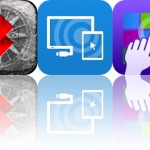