You are using an outdated browser. Please upgrade your browser to improve your experience.
Pocket Gaming
by Christine Chan
September 19, 2016

In case you’ve been living under a rock for the past several months, you may be well aware that Pokémon Go is one of the hottest mobile apps around, ever since it launched in the US on July 7. Swarms of people have hit up the local parks, malls, piers, and other densely populated areas in the city to catch the Pokémon on their Pokémon Go accounts (either through Google or the Pokémon Trainer Club).

Even though Pokémon Go is still in its infancy (Niantic CEO John Hanke said at San Diego Comic-Con that the game we have right now is only about 10 percent complete), the game has gone through several phases of popularity, having peaked right before the removal of the three-footstep tracking system.

I’ve been with the game since the beginning, so I’ve witnessed the peak of the game in my area (it has died off significantly at some once-popular parks), the crowds who swarm for rare Pokémon in hotspots, and now people who follow Twitter feeds of rare spawns in specific cities.

While Sept. 16 is better known as the date that the iPhone 7 and iPhone 7 Plus came out, it is also when the Pokémon Go Plus accessory was released, after a short delay (original release date was supposed to be at the end of July). Pre-orders for the Pokémon Go Plus were sold out months in advance on Amazon and GameStop, and many people have been sharking them on eBay for more than double the retail price of $35. Fortunately, my boyfriend and I were lucky enough to find exactly one extra Pokémon Go Plus at a single GameStop store in my city, so I decided to put it to the test through the weekend.

The Facts
Company
Nintendo
Product
Pokémon Go Plus
Compatibility
iPhone 5/5c/5s/SE/6/6s/6 Plus/6s Plus/7/7 Plus with iOS 8 and above. Also compatible with Android devices that have 2GB RAM or more with Android version 4.4–6.0 installed. Bluetooth Smart (v4.0) is required.
Price
$34.99 MSRP
Website
http://www.pokemongo.com/en-us/pokemon-go-plus/ 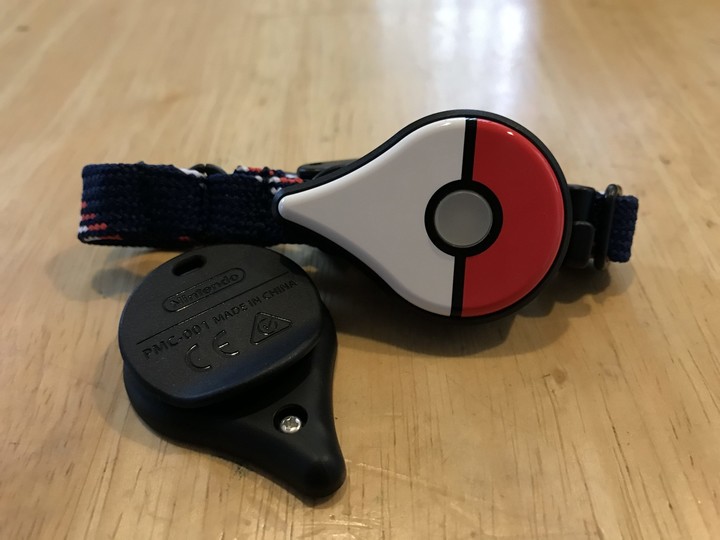 The Pokémon Go Plus is an optional accessory that is not required at all to play the game. The Plus can be worn as a clip-on to your shirt, pant pocket, belt, etc., or you can use the included wristband to have it on your wrist, which is much easier to see when it lights up. If you want to go the bracelet route, you will need a standard Phillips screwdriver to remove the clip part and put it in the wristband.

The Plus peripheral is merely an accessory that enhances your overall Pokémon Go playing experience, as it lights up and vibrates when there is a Pokéstop (blue light) nearby or a Pokémon (green light). With just a push of the button, the Plus will spin Pokéstops for you and collect items, or throw a single Pokéball in an attempt to catch a Pokémon. 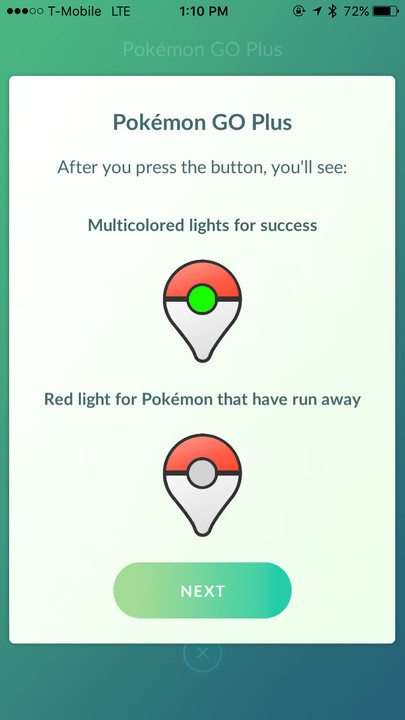 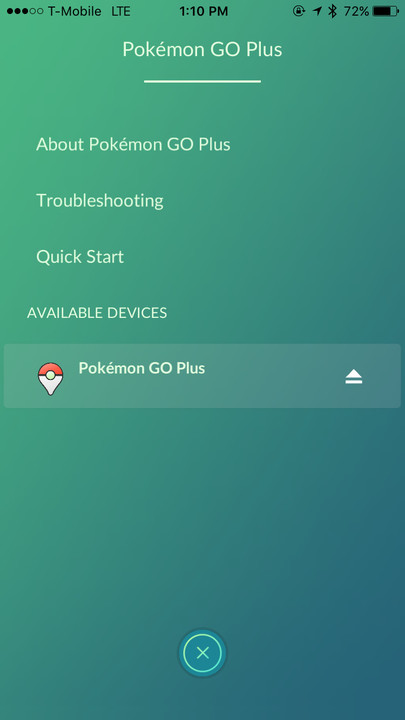 The process of connecting the Pokémon Go Plus to your game is easy. Just launch Pokémon Go, tap on the Pokéball button to access the game menu, go to Settings, and then tap on the recently added “Pokémon Go Plus” option. Then just press the button on your Plus device, and it will show up in the “Available Devices” section for you to pair. You can also un-pair the device by tapping on the “Eject” button.

If you have a Plus connected to your account, you will see a Pokémon Go Plus icon on the main map view in the game. If it is dim, that means that it is disconnected at the moment — just tap on the icon and then push the button on your peripheral to connect it. It’s fast and easy to get it going once it’s paired. If you want to end the Plus session, just tap on the icon in the game. It will also disconnect automatically after a period of inactivity, or if you catch a Pokémon in the game itself, or when you battle gyms, which I found a bit annoying. At least pairing it again is an easy task. 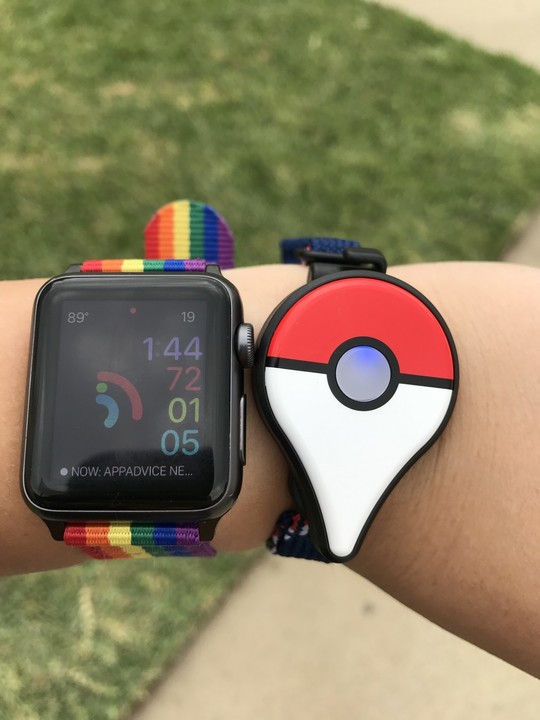 One of my biggest reasons for wanting the Plus was the fact that it makes it much easier to collect Pokéstops. Whether I’m driving around town (where there are a ton of Pokéstops around), walking the dogs, taking the train or bus, or even just a casual stroll around the block, I find it great that I don’t have to have my phone out with the screen on all the time to make sure I don’t miss collecting a stop.

On the Plus, when you are within range of a Pokéstop, the device will vibrate with two vibrations in quick succession and flash blue. Push the button and you’ll collect the resources from the stop. If you are going too fast (i.e. in a car), it will flash red if you’re out of range by the time the action registers. It will flash a variety of colors if you successfully gathered the items. 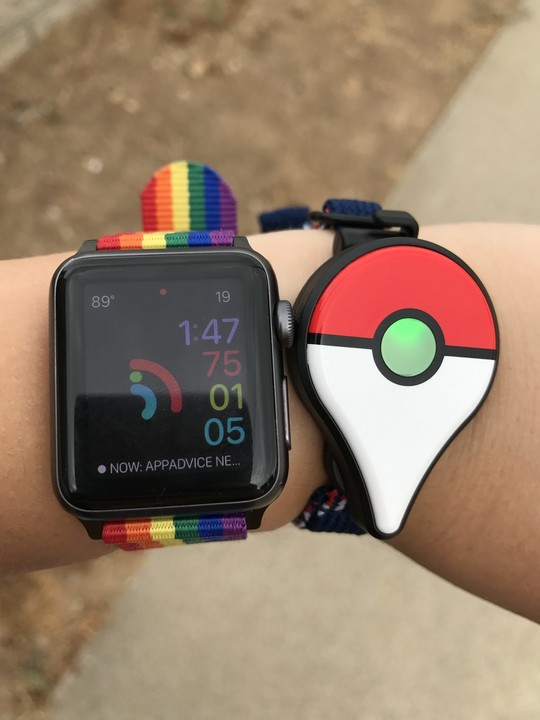 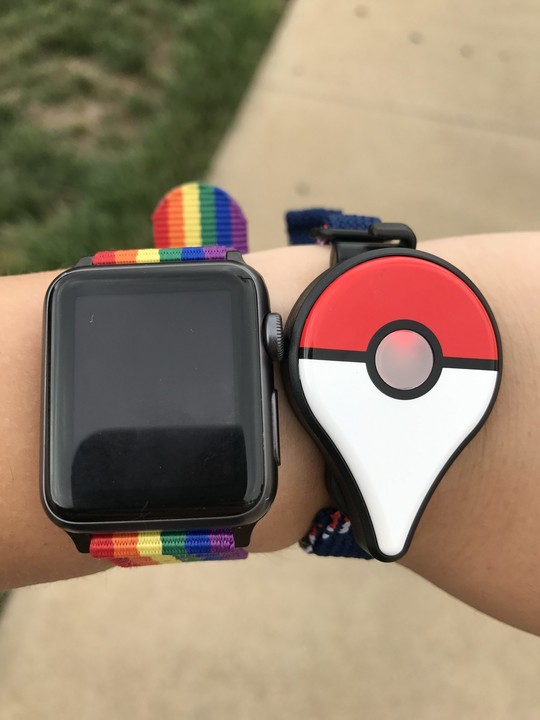 The Pokémon Go Plus accessory is also capable of helping you catch Pokémon, but I don’t recommend replacing the entire playing experience with the Plus if you are hunting for rare Pokémon to complete your Pokédex or want high CP and IV mons.

The reasoning behind this is simple. With the Plus accessory, it will vibrate and flash green if there is a Pokémon nearby. Push the button and the accessory will throw only one regular Pokéball for you. Sometimes it flashes red immediately, informing you that it fled, or sometimes it will do the “ball shake” animation, where it flashes white one to three times before telling you if it escaped or if you caught it (rainbow light flash or yellow if it’s a new Pokémon). But you won’t know what got away or what you managed to catch until you open up the app and check your avatar’s journal, where you’ll either be ecstatic if you got super lucky or disappointed if something good escaped your clutches (more than likely it’s the latter). 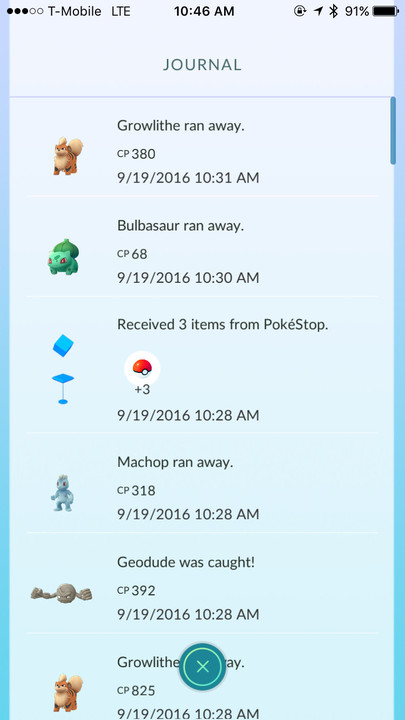 I haven’t crunched exact numbers from my weekend Pokémon Go Plus play sessions, but a redditor over at /r/TheSilphRoad posted their results after a two-hour bike ride with the Plus. They calculated a capture rate of about 41 percent and a run rate of 59 percent. Compared to capturing Pokémon in the actual game, this rate is atrocious and rather frustrating.

When I’m actively playing the game through the app itself, I always curve my throw and try to land it inside the white circle when the colored ring is smaller, as it increases the capture rate (so I’ve read). So knowing that the Plus is just throwing one single Pokéball in a straight line with no technique behind it is a slap in the face, really. Add in the fact that normally the Pokémon doesn’t flee after one throw either (you’ll end up throwing a ton of different balls sometimes for one capture), and it’s rather insulting.

I also noticed that the Plus prioritizes nearby Pokémon over Pokéstops as well, which is just adding insult to the injury. For the amount of money paid for the device, there should be options to configure the type of Pokéball (regular Pokéball, Great Ball, or Ultra Ball) depending on the CP level. For example, I would want to use a regular Pokéball for a Pokémon with a CP < 500, Great Ball for CP > 500, and an Ultra Ball for CP > 1000. I hope that this is in the pipeline for Niantic, because it would make the experience with the Plus much better. 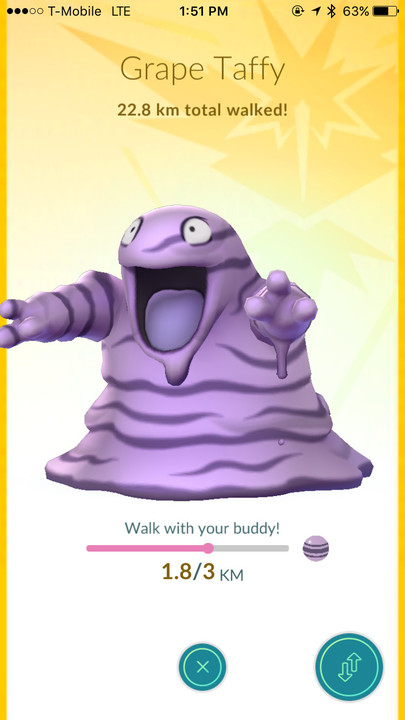 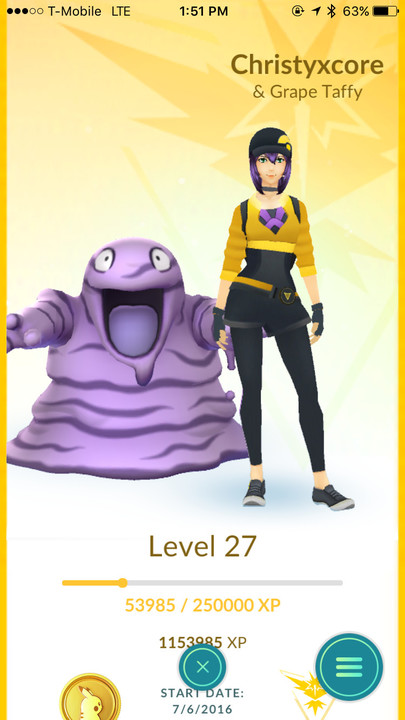 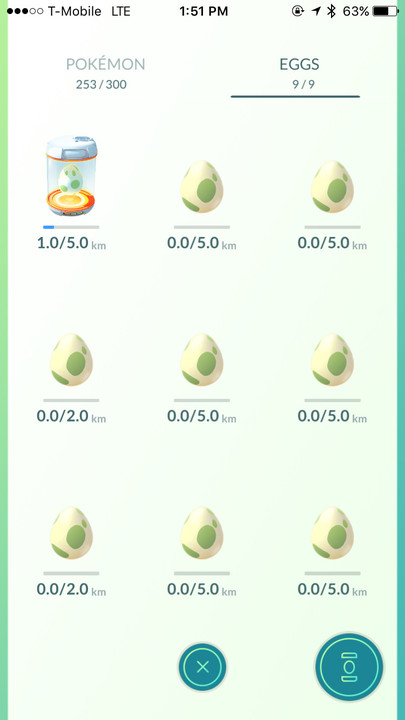 In Pokémon Go, there are two aspects of the game where distance matters: egg hatching and now the recently implemented Buddy system. With egg hatching, you have to walk a certain distance (2km, 5km, or 10km) to hatch an egg in your inventory for a new Pokémon, with rarer ones being in higher kilometer eggs. The Buddy system lets you pick one Pokémon from your collection to walk with you, and they are able to find “candy” after you walk a certain distance with them (1km for Pokémon from 2km eggs, 3km for 5km, and 5km for 10km mons). The candies are required to evolve or powerup Pokémon, so it’s a vital resource in the game, along with Stardust.

Normally in the game, at least on iOS, you have to have the game running in the foreground to track the distance between Point A to Point B after a one-minute or so interval. Because of this, it was most efficient to travel in straight lines for the distance to properly register and count towards your egg or buddy. But no one has been fully satisfied with how the game registers distance traveled because of this wonky system, especially as you need to have the app open for it to work — otherwise, it doesn’t count.

Fortunately, the Plus accessory makes it much easier to track distance properly. I’ve noticed that once I connect to the Plus, leave the game running in the background (there’s now a blue banner saying Pokémon Go is using your location), all of my distance is still tracked without having to have the game open the entire time. I see more distance being counted towards my egg and buddy progress as I’m out-and-about, which is alone worth getting the Plus for. 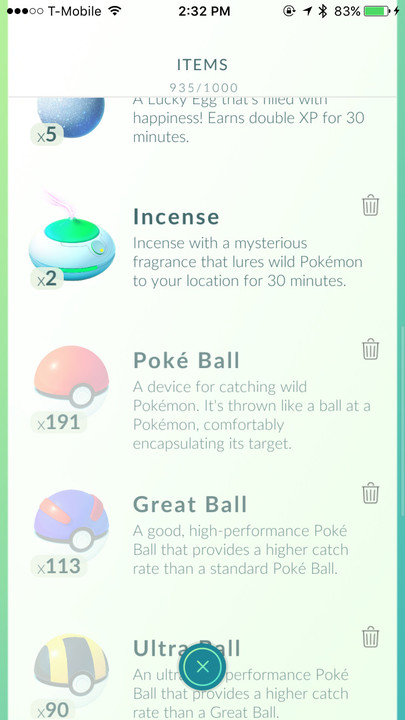 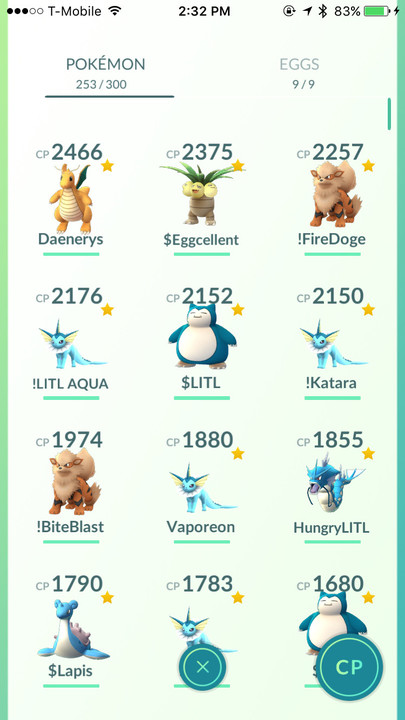 I’ve only spent the weekend with the Pokémon Go Plus so far, but I’m enjoying having it aid in my experience with the game. I like the fact that there are two ways to wear it, though I find it much easier with the wristband, though it looks more subtle as a clip. Being able to track my distance without having the game running on the screen all the time is well worth the price alone if you’re a serious Pokémon Go player, and being able to collect Pokéstops along your commute without draining out your battery is nice.

The problems I have with the Plus are the fact that you can’t change what type of ball is used to catch, and you only get one chance, regardless of what it is. It’s also annoying that it priortizes Pokémon over Pokéstops, so you have to waste your time gambling on Pokémon even if you just wanted to get more resources. Still, it is cool that I am able to even have the chance to catch these Pokémon I would have never detected with just having the app open. Hopefully Niantic addresses all of the flaws with the Pokémon Go Plus peripheral in the future.

If you’re a serious Pokémon Go player and want to make the experience better, then I recommend picking up a Pokémon Go Plus if you’re able to find one for the retail price of $35.

Get Pokémon Go and become the very best, like no one ever was! 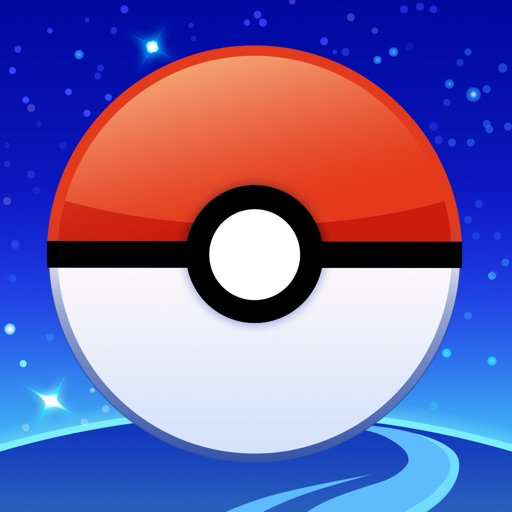 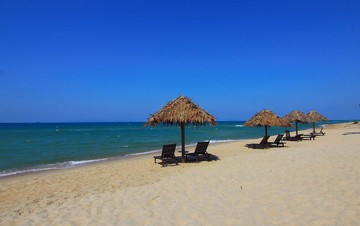 Make Sense of Your Travel Plans With Google Trips