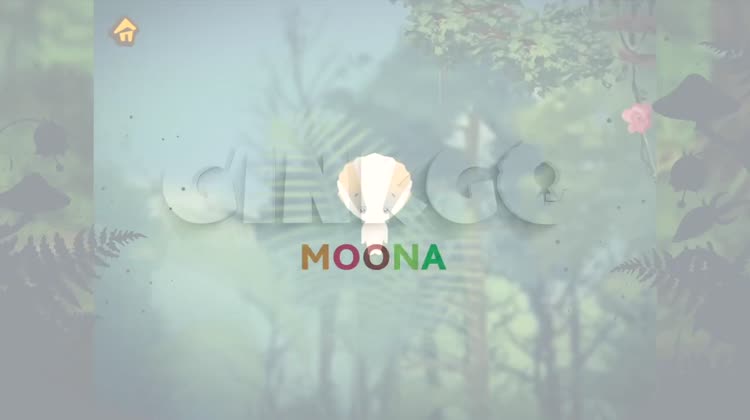 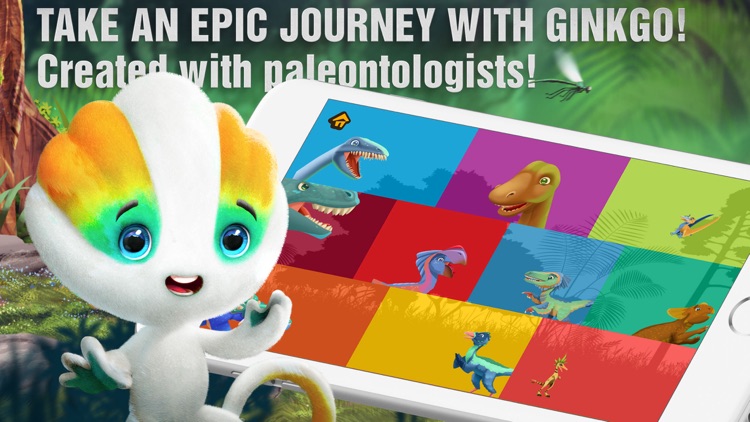 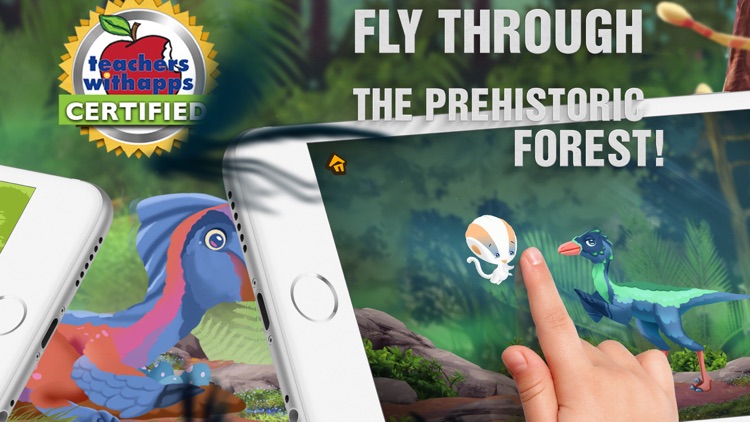 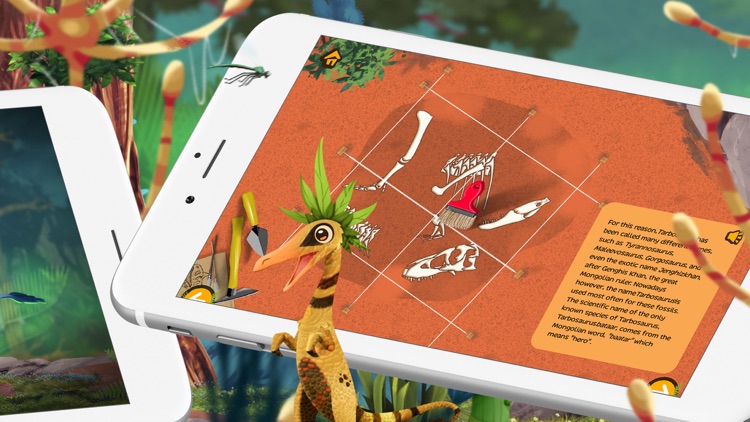 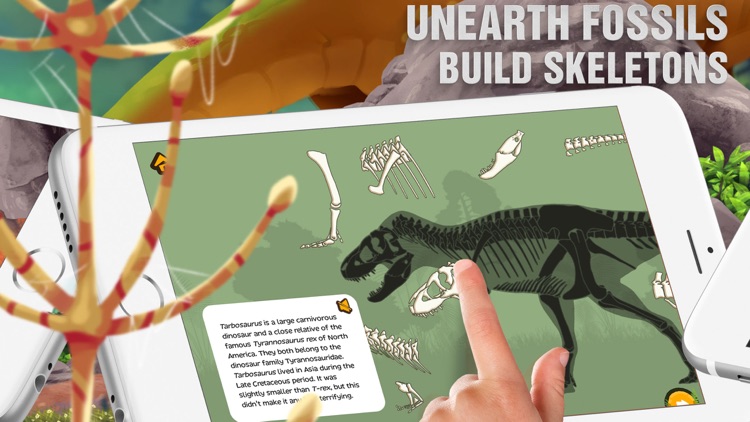 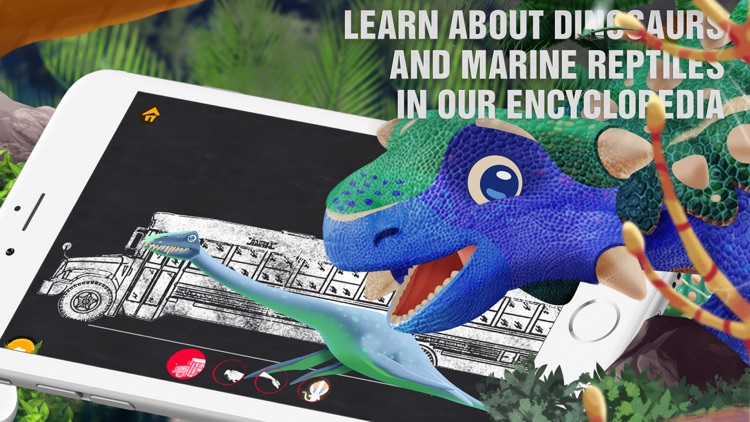 Ginkgo Dino is a Parents' Choice Recommended Award winner (spring 2017).
"The Ginkgo Dino app is a fun science app for a wide age range of children. Both dino-lovers and those not yet familiar with these now extinct giant beasts will enjoy this experience…" - techwithkids.com
"This is an app that has what we call MAGIC, it has found the fine line between too much or too little and developed a game with the user in mind – no down time, no lapses in action, and not too many bells and whistles or other annoying repetitive reinforcements." teacherswithapps.com

The app about dinosaurs, and flying and marine reptiles, is created in collaboration with paleontologists. The app consists of two major parts: an educational game-adventure, and an interactive scientific encyclopedia. It is interesting for dinosaurs’ lovers of all ages, including parents, teachers and educators!

Tap on Gingko and fly through the ancient forest in the company of our cute fantasy character! We gave him such an interesting name in honor of one of the oldest trees on the planet. Baby Ginkgo can travel through time, he is curious and always ready for adventure.

Help Ginkgo catch the twinkling stars to uncover fun animations and listen to short stories about dinos and other reptiles. Ginkgo introduces us to creatures that lived more than 70 million years ago! We have choosen a wide range of interesting, sometimes little-known animals, that lived during the Cretaceous period. We show them to your child in a fun way, through interactive features.

The encyclopedia describes each ancient reptile encountered in the adventure part of the app. All articles are written by paleontologists. We thank them for the thoroughness of their work and their dedication. They worked non-stop on the text for the app even during fieldwork, sitting in a tent next to an excavation!

Our encyclopedia about dinosaurs, and flying and marine reptiles, is an interactive book which you can not only read, but also use for learning and playing! If your child is too young to read or listen to the child-friendly scientific text, she (or he) find so much to do! Even a four year old will enjoy unearthing skeletons, completing puzzles, or comparing dinosaurs with modern animals.

• 2 complete parts: the game part with Gingko’s journey of discovery, and the interactive science encyclopedia
• 10 characters: Vera the Oviraptor, Donna the Troodon, Zato the Rapetosaurus, Nyam the Velociraptor, Bataar the Tarbosaurus, Min the Nemicolopterus (a flying reptile), Anna the Ankylosaurus, Nut the Protoceratops, a family of Shuvuuias, and Liz the Elasmosaurus (a marine reptile)
• Introduction to the world of the dinosaurs through the educational adventure. Fly through the woods and get acquainted with each character
• An encyclopedia written and edited by scientists
• Author illustrations
• Funny animations that immerse the child in the atmosphere of the prehistoric world
• Professional translation, scientific editing
• Unearth fossils (careful, they are fragile, you can work only with a brush!)
• Build skeletons (we picked the most accurate reconstruction of prehistoric animals)
• Fully narrated scientific texts - choose if you want to read or to listen
• Easy, intuitive operation
• No in-app purchases or third-party advertising. So you and your child are free to discover without interruptions!

ABOUT MOONA GROUP
The iPad is just a small window that opens into the digital world, often into a fantasy world. It can not - and should not - replace the natural world, and can never be as striking and interesting. But we sincerely believe that even this small window can be the basis for bright, memorable experiences that inspire curiosity about the real world. Our goal is to create memorable childhood experiences that may one day turn the child into a scientist, researcher, inventor, or simply an inquisitive, curious person. 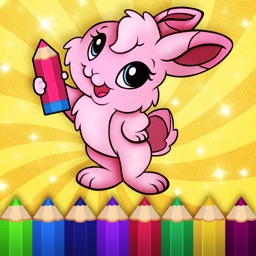 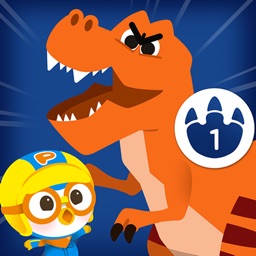 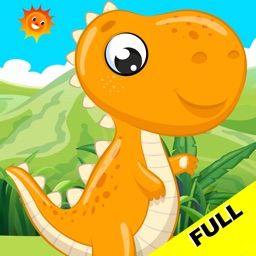 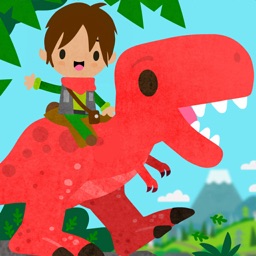 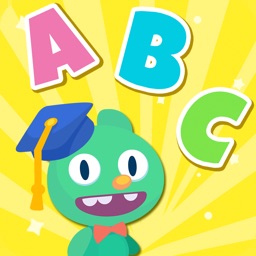 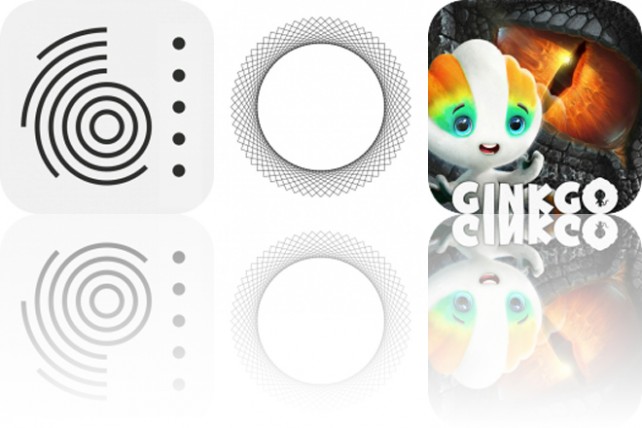 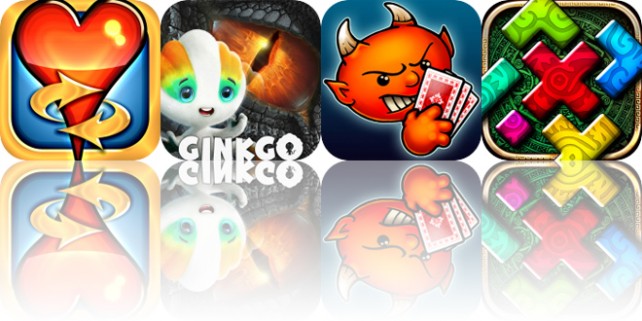 Today’s AppsGoneFree list includes a game of hearts, a reference app, and a card game.