You are using an outdated browser. Please upgrade your browser to improve your experience.
by Casey Tschida
January 20, 2011
Making a debut in iOS 4.3 beta 1 for developers using the iPad, iOS Multi-Touch gestures offer similar control as the Home button on iDevices. Even though this new feature still isn't provided to developers for the iPhone and iPod touch in 4.3 beta 2, there appears to be evidence that Apple may be testing it internally. Boy Genius Report made a mention yesterday evening about receiving some iOS 4.3 screenshots that depicted the Multi-Touch gestures option available on an iPhone 4. Unfortunately, these screenshots appear to be from an iPhone 4 restricted to Apple campus employee's eyes only. 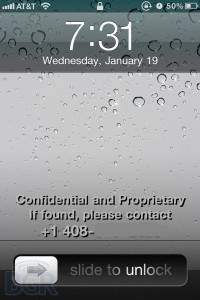 Taking a closer look at the screenshots, the build seems to be an ever slightly updated iOS 4.3 beta 1. The build number for 4.3 beta 1 for iPad, iPhone, and iPod touch released to developers is 8F5148b, whereas these screenshots show a build number of 8F5148c. As further evidence of 'internal' only, the lock screen displays a message of "Confidential and Proprietary If found, please contact +1 408-[...]." It has been rumored that this message was added to Apple campus only builds after the Gizmodo fiasco. It's no surprise that Apple is testing this feature on all devices, but why internal only? Simplify speculation, but I'd guess it's because of the necessary fine-tuning required. Let's be realistic, four or five fingers on an iPhone or iPod touch screen at once is pretty cramped. Apple may feel that this sort of sensitivity would lead to unnecessary and obvious negative feedback. Perhaps, they'll wait until they find it satisfactory on their end before allowing developers to struggle with it. Considering that Apple is only offering this feature as a preview for now. it's a safe bet that it will be implemented properly by the time it sees an official public release. [Image credit BGR] 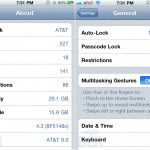 Multi-Touch Gestures For The iPhone And iPod Touch - But Not Yet For Devs
Nothing found :(
Try something else