You are using an outdated browser. Please upgrade your browser to improve your experience.
by Alexander Vaughn
April 27, 2011
Following an almost ten month long delay, Apple has finally managed to overcome the difficulties preventing it from shipping the white iPhone 4. In a press release just moments ago, Apple announced that the device will be made available all around the world starting tomorrow, April 28th. The White iPhone 4 has been a long continuing saga. After we first exclusively found out about it almost a year ago, the device was unveiled and shown at the official iPhone 4 launch, then scheduled to come along the black version. Unfortunately, the device went through multiple delays, related to manufacturing difficulties and was finally declared dead by many observers. Apple never backed out of making the device however, and announced it would come out in the Spring. Well, Spring has come and Apple kept its word. The white iPhone 4 will be available for purchase starting tomorrow. So yeah, it's great news for those who're out for a handset right now, as it's reportedly stunning. I don't believe anyone has been holding off this long, but if you did, your time has come as well. Another interesting point is that this release can be interpreted as another clue that Apple won't launch an iPhone 5 two months from now, but will rather wait until September. The device is available in both GSM and CDMA versions, at the same price as the black model. You can order online on Apple's site (which just started featuring it), or at many retailers. It's reportedly pretty much the same device we've already known, aside from a slightly improved light sensor. Relieved ? Getting one tomorrow ? Tell us in the comments! Official press release: 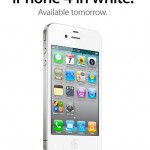 Apple Announces The White iPhone 4 - Coming Tomorrow
Nothing found :(
Try something else