You are using an outdated browser. Please upgrade your browser to improve your experience.
by Joe White
April 20, 2011
According to "three people with direct knowledge of [Apple's] supply chain," the fifth generation iPhone will begin production in July, and will start shipping in September. The news comes from Reuters, who published a report on the iPhone 5 earlier today. According to the website:

Apple's next-generation iPhone will have a faster processor and will begin shipping in September, three people with direct knowledge of the company's supply chain said.

This supports the various rumors we've previously published, which suggested that Apple would premiere the next generation iPhone at its annual fall media event. The event usually takes place around the beginning of September, and in the past has focused its attention on Apple's new line of iPods. If the iPhone does include a "faster processor," this will likely be the dual core A5 processor featured in the iPad 2. Other speculated features of the iPhone 5 include a larger screen, larger capacity internal storage, and a new design. However, according to Reuters' sources, the fifth generation iPhone "will look largely similar to the iPhone 4." We'll keep you posted. 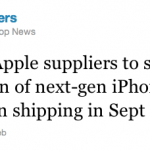 Reuters: iPhone 5 - Shipping From September
Nothing found :(
Try something else