You are using an outdated browser. Please upgrade your browser to improve your experience.
by Joe White
June 14, 2011
It's been a long drawn out legal battle, but Apple and Nokia have finally come to an agreement regarding patent disputes. Apparently, Apple has paid Nokia a "one-off payment," and will also continue to pay Nokia royalties for the use of the company's patents. Nokia has been accusing Apple of patent infringement since 2009, and there have been many twists and turns throughout the course of the dispute. However, the two companies have now come to an agreement. Following a "one-time payment" to Nokia, Apple will continue to make regular, on-going payments to Nokia for the use of its patents. As reported by The Wall Street Journal, here's what Nokia CEO Stephen Elop said regarding the issue:

"We are very pleased to have Apple join the growing number of Nokia licensees," Nokia Chief Executive Stephen Elop said in a statement, adding that the deal "enables us to focus on further licensing opportunities in the mobile-communications market."

And here are Apple's comments:

"We're glad to put this behind us and get back to focusing on our respective businesses," Apple Europe spokesman Alan Hely said. "Apple and Nokia have agreed to drop all of our current lawsuits and enter into a license covering some of each others' patents, but not the majority of the innovations that make the iPhone unique."

Despite Nokia's success, this doesn't mean the company won every round of the battle. In fact, the International Trade Committee recently sided with Apple regarding another patent infringement accusation. However, the "lengthly legal battle" has finally come to an end - which is good news for both companies. We'll let you know if there are any developments. 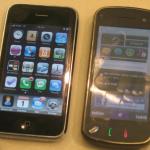