You are using an outdated browser. Please upgrade your browser to improve your experience.
by Joe White
June 7, 2011
Yesterday, Apple gave us a preview of iOS 5 during its WWDC keynote presentation, and I have to say - it looks good. The company has added over 200 new features for users, such as an improved notification system, a Reminders app and an improved Camera app. However, some of the features Apple demonstrated may have seemed a little familiar to jailbreak fans. The big iOS-related announcement Apple made yesterday involves its new notifications system, which looks awesome. Now, notifications aren't intrusive and obstructive - instead, they appear gracefully along the top of your iPhone's screen, and can be viewed en masse in a "Notification Center." This is great, though you can trace the idea to a jailbreak tweak called MobileNotifier, which was originally developed by Peter Hajas. In this tweak, Hajas constructed a brand new notification system for the iOS. Here's how it looked: Interestingly, Peter Hajas has reportedly been working for Apple, Inc. for some time now, suggesting that he may have had an input into the development of Apple's new notifications system. For the sake of comparison, here's a similar screenshot highlighting Apple's new system: Furthermore, Apple's revamped Mail app has put an end to Ryan Petrich's Rich Text For Mail jailbreak tweak. Speaking with TUAW, Petrich said:

"With iOS 5, Apple continues the trend of cloning features and designs pioneered by myself and others into the OS itself. It is great to see these enhancements become available to millions of users, but it affects the ability of others to innovate on the platform independently of Apple."

Other new features include the ability to use an iPhone while syncing, gridlines for the Camera app, widgets and more. In the past, Apple has come up with its own answer to other jailbreak apps, too. Just think of Personal Hotspot - a MyWi-replacing feature that launched with iOS 4.3 and iOS 4.2.5. Obviously, if Apple really is taking a stand against jailbreaking, the only way the Cupertino, CA company can do this is to provide users with every feature they want in the iOS. A lot of us (like myself, for example), don't care about simply modifications and themes - it's the killer jailbreak features that push so many Apple fans into the open arms of the iPhone Dev-Team. Before you start in the comments, don't get me wrong - I'm not saying iOS 5 users aren't going to want to jailbreak their iPhone, because people always are. Some do this for the carrier unlock and others, just for the hell of it. Cydia will live on, new tweaks and apps will be developed and some of these might even make their way into the iOS in legitimate Apple-developed versions. However, others may not bother. Do you think Apple's upcoming operating system will satisfy your iOS needs? Let us know in the comments. [via TUAW] 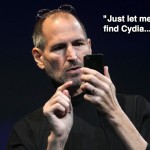 Here's How Much Notice Apple Takes Of Jailbreak Developers

Here's How Much Notice Apple Takes Of Jailbreak Developers
Nothing found :(
Try something else