You are using an outdated browser. Please upgrade your browser to improve your experience.
by Joe White
July 29, 2011
According to a recent report, Apple and Verizon are currently at loggerheads regarding "FaceTime over 3G," a feature expected to launch in iOS 5. Apparently, while Apple wishes for the feature to be available to all iPhone owners, Verizon is insisting that the feature only be accessible to customers enrolled in a tiered data plan. Initially, CDMA iPhone 4 owners had the option of signing-up to an unlimited data plan with Verizon, for $30/month. Everyone knew this was too good to be true, and months later Verizon removed the unlimited plan, and replaced the plan with a series of tiered, limited data plans. However, customers had the option of becoming "grandfathered" into an unlimited data plan, provided they sign-up before the end date. Now, in an article recently published by Mark Gurman of 9to5Mac, it is claimed that the website's "sources" have some information regarding FaceTime over 3G - namely, that Verizon wishes to restrict the feature to tiered data plan customers, while Apple would rather allow every Verizon iPhone customer to engage with the service:

The problem is that Verizon stresses that the feature should be limited to tiered-data plan users only. This would consequently limit usage over 3G, furthermore leaving open more bandwidth. This would mean higher quality calls over 3G.

If the website's sources are to be believed, there is a possibility that CDMA iPhone owners with Verizon will be unable to make FaceTime calls over 3G, if the feature does launch later this year. The same could be said for AT&T, whose stance on this matter is currently unknown. The issue is simply that if everybody uses the service, the quality of 3G FaceTime calls will be poor. However, at the same time it's also important to make the service available to all. It's definitely important to be able to take FaceTime outside of a Wi-Fi network. Here's hoping Apple can come to an agreement with carriers, and make the feature available to both unlimited and limited customers. If not, this will be a key motivation to ditch the unlimited data plan and sign-up for a tiered, poorer value plan. We'll keep you posted. 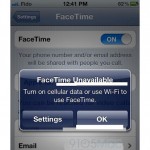 Verizon Reportedly Wants FaceTime Over 3G To Be Limited To Tiered Data Plans
Nothing found :(
Try something else