You are using an outdated browser. Please upgrade your browser to improve your experience.
by Joe White
August 26, 2011
Already, we've heard rumors claiming Apple will retail a cheaper iPhone either in September or October, which many are calling the "iPhone 4S." Now, a series of images have hit the Web which appear to show casing for the upcoming smart phone. If the images are legitimate, we can expect the "iPhone 4S" to look very much like the iPhone 4, but with a tweaked antenna design. As you can see in the above image, the handset looks a lot like Apple's fourth generation iPhone. However, as MacRumors notes, the smart phone appears to feature a modified antenna - suggesting that it will not succumb to the "antennagate" issue many iPhone 4 owners experienced last year. However, there's more. According to MacRumors:

The reason for the movement of the antenna breaks is to accommodate different frequencies of the different mobile technologies. This "iPhone 4S" appears to have a slot for a SIM card, suggesting that at a minimum it will support the GSM standard like the original AT&T iPhone 4. It is believed the iPhone 5 will support both GSM and CDMA, but we haven't heard anything definitive about the band support for this iPhone 4S.

A cheaper, contract-free iPhone would undoubtedly be appreciated by many. Though remember, as of this moment nothing as been confirmed by Apple. We'll keep you posted, and in the meantime, feel free to share your thoughts in the comments. [iPatchiPods] 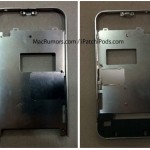 Apple's "iPhone 4S" Casing Looks Like iPhone 4 With Tweaked Antenna Design
Nothing found :(
Try something else