You are using an outdated browser. Please upgrade your browser to improve your experience.
by Joe White
September 17, 2011
Today was the day of MyGreatFest - the world's first iOS and jailbreak convention. In this article, we've outlined everything that's happened at the event (we were there!), link to other MyGreatFest articles and upload images. Later, we'll be hearing from Chronic Dev Team member @p0sixninja, and the "Father of Cydia," Jay Freeman (@saurik). 10:11 a.m. Alright, we're all seated inside the venue (The Old Truman Brewery, London). The first speaker to appear on-stage should be Craig Fox (@flawlessfox), the mastermind behind MyGreatFest. 10:17 a.m. Craig Fox is now on stage. He's presenting the MyGreatFest team and thanking everyone who's been involved. He also pointed out Jay Freeman, who's sitting in the front row.

Two members of the Chronic Dev Team (fronted by Joshua Hill, @p0sixninja) have taken to the stage and talked about all the great things they have prepared for iOS 5 and the upcoming iPhone. In a nutshell, we should feel pretty safe about getting a new jailbreak very soon. Read on to find out all the details.

After lunch (and a massive giveaway!), the iDroid Project took to the stage. The team behind this project aims to fully port Android to Apple's newer iOS devices, and have been working hard for several years. For our coverage on the iDroid Project's talk, check out their presentation.

The developer of iFile took to the state to discuss the popular jailbreak app. Read on to find out more.

In this talk, James Whelton (@JWhelton) explains how jailbreaking the sixth generation iPod nano propelled him into the jailbreak community. However, while Whelton had to step aside and allow others to pursue the iPod nano jailbreak (due to school commitments), he has got a variety of other projects on-the-go, including his tweet-crunching company. In the future, Whelton is planning on re-entering the jailbreak scene. And on the side, he could always work some stand-up comedy, because he's actually a really funny guy.

Jay Freeman, the man behind Cydia, has given a lengthily talk about the jailbreak application store including exciting stats and upcoming projects. Make sure to check out all the details. 05:04 p.m. That's all, folks. Craig Fox and the rest of his team have jumped on stage and are saying goodbye to the crowd. It's been a great day, and everyone here has clearly enjoyed it. Be sure to take a look at all of our MyGreatFest coverage articles over at the main site, or check out the above links. 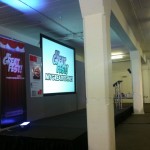 MyGreatFest - From Cydia To iOS 5 Jailbreak - Here's Everything That Happened

MyGreatFest - From Cydia To iOS 5 Jailbreak - Here's Everything That Happened
Nothing found :(
Try something else