You are using an outdated browser. Please upgrade your browser to improve your experience.
by Joe White
October 28, 2011
In a recent Twitter update, iPhone Dev-Team member @MuscleNerd has shared some information on the state of the iPhone 4S jailbreak. In short, the Dev-Team has been able to jailbreak the handset, but @MuscleNerd does note that this is a "very preliminary" solution, and that there is "lots of work left." Currently, it's not possible to jailbreak the iPhone 4S via either a tethered or untethered solution. The iPad 2, which features a similar dual-core A5 processor, can be "liberated" using @comex' JailbreakMe (not under iOS 5, though). But since @comex is now working for Apple, there's little chance of JailbreakMe getting an iPhone 4S-supporting makeover, meaning we've got to look towards the iPhone Dev-Team and the Chronic Dev Team for a solution. The Chronic Dev Team is hard at work developing an untethered solution for iOS 5. (There was even talk of the Chronic Dev Team launching a fifth-generation iPhone jailbreak at MyGreatFest, now JailbreakCon - but the handset wasn't released in time.) Now, it looks like the iPhone Dev-Team is edging closer and closer towards developing a workable, release-able jailbreak solution for the iPhone 4S. As you can see in the above screenshot, an iPhone 4S handset has indeed been jailbroken using the Dev-Team's method - you can see Siri running under Cydia. Hopefully it won't be long until the iPhone Dev-Team finishes its work on the solution, though do remember @MuscleNerd's warning: "Huge missing pieces prevent public release. LOTS of work left." We'll keep you posted. 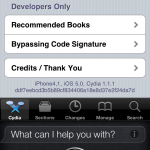 The iPhone Dev-Team Talks iPhone 4S Jailbreak
Nothing found :(
Try something else