You are using an outdated browser. Please upgrade your browser to improve your experience.
by Joe White
February 3, 2012
Screenshots of the upcoming Sparrow for iPhone application hit the Web recently (via 9to5Mac), before the original post was pulled. Below, we've included a gallery of the images - as you can see, the app looks elegant, well-designed and, in short, everything we expected it to be. For a while now, Sparrow has been a popular email client for the Mac. However, back in August the app's developer confirmed that an iPhone version of its email client was set to launch, and in November we heard that Sparrow for iPhone should be available within a few months. Previously, the only image of the app in-action we had was this. However, thanks to a 9to5Mac tipster, screenshots of the application very recently hit the Web. Though the original post has since been removed, we've included a collection of these images in the gallery below for you to take a look at. If you take a look at the screenshots in our gallery, the iPhone app uses the same color scheme and icons as the Mac application. It also looks like users can quickly reply, star or archive emails through sliding their finger across an email (rather like replying to tweets in an earlier version of the Twitter app). However, we won't be sure of this until Sparrow for iPhone launches. Here's hoping the app becomes available soon. In the meantime, feel free to post your thoughts on the screenshots in the comments below. [gallery link="file"] 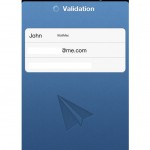 A Collection Of Sparrow iPhone App Images Hit The Web

A Collection Of Sparrow iPhone App Images Hit The Web
Nothing found :(
Try something else