You are using an outdated browser. Please upgrade your browser to improve your experience.
by Jamie Young
February 20, 2012

With the ever-growing number of “fake” apps and more ripoffs popping up in our App Store space, we feel it’s our job to warn you guys of those trying to take advantage of you, and your money.

What is it this time? Pokemon! You may have noticed that a new Pokemon app, Pokemon Yellow, was released in the App Store a couple of days ago. Well, guess what? That’s right, it’s a scam. Despite it rising to the top of the charts, stay away! The app doesn’t even work; it’s just a ploy to get your money.

And then today, before we knew what hit us, Pokemon - Pocket Edition popped up in the App Store. This app, though it does what it says in the description, just shows you a gallery of photos from the Pokemon game and plays some music. It’s not a game at all.

This is another time for us to stress: make sure to read app descriptions and reviews before downloading apps. And don’t waste your time or money with these worthless apps.

Though we think it would be both great and beneficial if Apple and Ninetendo banded together, Nintendo probably won’t be on board. So, think twice before getting excited about Nintendo games “ported to iOS,” because they’re likely fakes.

Steer clear, folks. There is nothing even remotely cuddly about these Pokemon.

And, you know what? I was surprised the developer names weren’t something clever like “Team Rocket.” App scammers, I am disappoint. 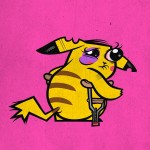 Prepare For Trouble And Make It Double: These Pokemon Apps Are A Scam

Prepare For Trouble And Make It Double: These Pokemon Apps Are A Scam
Nothing found :(
Try something else