You are using an outdated browser. Please upgrade your browser to improve your experience.
by Brent Dirks
February 16, 2012
Apple's toughest competition in the fourth quarter tablet market was an interesting one: the company itself. According to a recent report by IHS's iSuppli, the enormous popularity of the iPhone 4S was the biggest competition to the iPad 2's dominance of the market. Apple shipped 15.4 million iPad and iPad 2 tablets during the last three months of the year, up from 39 percent and 11.1 million in the third quarter. Even so, the iPad's share of the global market slipped from 64 percent in the third quarter to 57 percent in the fourth quarter. For 2011, Apple shipped 40.5 million iPad and iPad 2 tablets, up sharply from 15.1 million in 2010. In the entire tablet market, 65.2 million units were shipped globally. But the record 37.04 million iPhones sold during the last quarter had an impact on the iPad market.

"Shipments of the iPad line fell short of IHS estimates in the fourth quarter as many loyal Apple customers devoted their dollars to shiny new alternatives," said Rhoda Alexander, senior manager, tablet and monitor research for IHS. "However, the primary alternative wasn't the Kindle Fire—which debuted to solid sales in the fourth quarter—but Apple's own iPhone 4S smartphone. The rollout of the iPhone 4S in October generated intense competition for Apple purchasers' disposable income, doing more to limit iPad shipment growth than competition from the Kindle Fire and other media tablets."

While Tim Cook may not have been concerned about the threat of the lower cost Kindle Fire, Amazon's new tablet was able to take a chunk out of the tablet market. Amazon shipped 3.9 million Kindle Fires in the fourth quarter, good enough to capture 14.3 percent of the market in the final quarter. The sales helped push Amazon past Samsung to become the second biggest tablet supplier. With the iPad 3 likely to be announced on March 7, with upgraded screen resolution and possibly LTE 4G connectivity, IHS iSuppli said Apple should easily be able to reclaim its lost market share during the quarter. Even with Apple's stock moving over the $500 mark earlier this week, are you surprised that the company's biggest competition was itself? We're not. (Image via Apple) 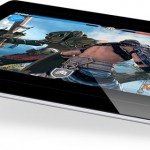 The iPad Market Share Dips In Part To Strong iPhone Sales
Nothing found :(
Try something else