You are using an outdated browser. Please upgrade your browser to improve your experience.
by Brent Dirks
March 30, 2012
If you need anymore convincing of Apple's power around the world, look no further than Japan. The Japanese were originally slow embracing Apple and its products, but that doesn't seem to be the case any longer. In a survey released today by Nikkei BP Consulting Inc., Apple was named the top consumer brand in the country. Moving from No. 11 last year, Apple dropped Android maker Google from the top spot to No. 2. Other brands in the Top 10 include YouTube at No. 4 and Panasonic at No. 7. The survey also said that the iPad and "two other key products" made the list of Top 40 brands. In a survey of the business market, Apple also came in second behind Japanese stalwart Toyota. Sales of Apple products in the country have also increased. In the winter quarter, the iPhone took top honors for the first time with 26.6 percent of smartphone sales in the country. With the introduction of iOS 5.1, Siri now offers support for the Japanese language. And the new iPad's voice dictation feature also supports Japanese. Are you surprised that the Japanese have finally embraced Apple and its products? (Image via MacObserver) 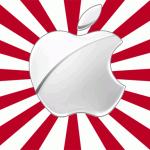