You are using an outdated browser. Please upgrade your browser to improve your experience.
by Joe White
March 7, 2012
Apple has just announced that it's launching a new version of its iOS mobile operating system. The new software update - iOS 5.1 - will be available to download later today for the iPhone, iPad and iPod touch, and has been in development for a while now (since November, 2011, in fact). Besides the usual bug fixes and stability improvements (we're hoping Apple has addressed those darned battery issues), iOS 5.1 adds a number of new features to our beloved iOS devices, including: But it's bad news for jailbreakers, as iOS 5.1 is known to patch the Corona exploit. If you're rocking a jailbroken iPhone, iPad or iPod touch then be sure to avoid this update if you want to hold on to your jailbreak. Here at AppAdvice, we'll be covering every piece of news Apple announces at its special event. Head over to our main screen and keep refreshing the webpage for the latest and greatest! 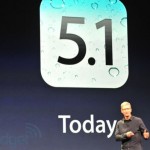 It's Been A While, But Apple Has Finally Announced iOS 5.1

It's Been A While, But Apple Has Finally Announced iOS 5.1
Nothing found :(
Try something else