You are using an outdated browser. Please upgrade your browser to improve your experience.
by Brent Dirks
March 6, 2012
Apple has recently been awarded a new patent grant that brings the iWallet idea closer to reality. According to Patently Apple, the newly found filings give us a better look at what an NFC-powered iWallet solution might look like. There are 23 patent claims contained in the information that go as far back as the first quarter of 2009, which shows how long Apple has been developing the technology. One of the more interesting nuggets of information unearthed in the patents is the use of a NFC-enabled iPhone tied in with an iTunes billing system for credit card statements and records. So, simply put, users could receive credit card statements directly through iTunes, which has more than 200 million credit card numbers on file. Among other things contained in the patents, there is a system for financial spending restrictions to be placed on subsidiary accounts, which would be perfect for parents to control their children’s spending habits or an employer to limit money spent by an employee. NFC, which is short-range wireless technology that can be used for a wide variety of applications, including contactless payment transactions, has been slow to take off without support from Apple. Currently, only a small number of Android handsets support Google Wallet that launched late last year. Rumors of a NFC-powered iPhone have surfaced for more than a year. Some expected the iPhone 4S to possibly contain the technology, but speculation has now moved to the iPhone 5, which is expected to be released sometime this fall. A MasterCard executive also hinted at Apple’s plans in January, saying that he didn’t know of a company that wasn’t looking at NFC technology. These new patents are probably proof that, instead of a wallet, consumers may soon never leave their homes without an iWallet. (Via 9to5 Mac) 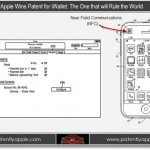