You are using an outdated browser. Please upgrade your browser to improve your experience.
by Brent Dirks
April 3, 2012
While Apple’s stock has continued to soar as fast as its sales, one analyst says there is no end in sight for the company’s growth. Gene Munster of Piper Jaffray said a $1,000 share price is very easily within the company’s reach. The stock is currently trading around $621. With around 1 billion shares outstanding, that price would push Apple over a $1 trillion market cap:

“We believe shares of Apple will reach $1,000 in calendar year 2014, which would imply a roughly 1 trillion dollar market cap, the first in history. While some investors believe the biggest issue for Apple to get to $1,000 is the market cap along with excessive investor exuberance, we believe the real story is earnings growth. Fundamentally, we believe shares can reach $1,000 based on our belief Apple will continue to win in global mobile devices. Despite the law of large numbers, we believe the opportunity in mobile devices (iPhone and iPad) are big enough for Apple to grow earnings by 20 percent plus over the next three years, while our price target is based on a 12x earnings multiple. The bottom line, while it seems virtually every investor (professional and retail) and analyst has something positive to say about Apple, the multiple on shares does not suggest there is excessive investor exuberance.”

A $1 trillion market cap is pretty amazing, even for Apple. In February, Apple's stock passed the $500 mark. But thanks to strong iPhone 4S sales, and a record first weekend for the new iPad, it has soared almost 30 percent since then. Sporting a current market cap of around $585 billion, Apple is about to set the all-time record as the most valuable public company. During the original dot-com boom in 1999, Microsoft was valued at $619 billion. With the iPhone 5 and possibly mythical Apple television set to be released this year, Munster said there is one issue that will drive or slow the company’s growth:

“The key risk to the Apple story is pace of innovation. While we have not seen anything to make us believe innovation will slow, it is the fundamental barrier that stands between shares at $600 and at $1,000. Apple has won the ecosystem and interface war, and must continue to innovate around its leadership position to grow the business. Going forward, consumer interest in owning future Apple products is a key metric to measuring Apple’s pace of innovation.”

Where do you think Apple’s stock will be in two years? If the pace of innovation continues, the $1 trillion market cap may be an easy goal to accomplish. (Image via Mactrast) 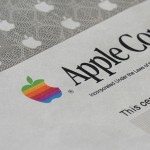