You are using an outdated browser. Please upgrade your browser to improve your experience.
by A.T. Faust III
April 3, 2012
For Apple fans everywhere, yesterday's "iController" rumor represents an exciting game-changer. For Nintendo fans, though, it's frighteningly indicative of a storied company's fall from grace: Nintendo has boldly ignored the opportunity of a lifetime. And it's one they'll likely never get again. Last year, I wrote a lengthy plea to the (now former?) gaming powerhouse, hoping to convince management to drop its antagonistic views, embrace the iDevice family, publish classic iOS ports, and build an ergonomic, traditional controller for Apple's platform. Here's the article, and here's the gist:

Nintendo, you’re struggling when (and where) you most certinly shouldn’t. Make the inexpensive controller, charge a reasonable premium, and crank out quality ports like there’s no tomorrow. Don’t worry about tweaking titles with upgraded graphics or new music or on-screen overlays, either; We don’t want that. All we require is straight-up, vanilla, no-nonsense Nintendo goodness. There’s no shame in being a bestseller on a competitor’s platform, especially when your modern advances aren’t possible anywhere but your own backyard. It’s literally a turn-key opportunity, and there’s no better kind of promotion than one that effectively familiarizes a massive public with your hard-earned, quality pedigree.

Naturally, Nintendo had none of it. Apple, on the other hand, is in perfect position to usurp any leverage the Japanese company could've gained. Indeed, the primary hurdle facing iOS gaming (and its inescapable "casual" designation) is its lack of familiar external controls. A touchscreen -- which makes perfect ergonomic sense for a smartphone or mobile computer -- can only do so much when applied to the longstanding input requirements of complex video games. There's no mystical rule that every title's better in tappable form; for most genres, true gaming engagement requires a true physical gamepad. Aside from the problem of input, there's little technological reason that iOS can't run better-than-Vita-quality games. Once it outs the iController, Apple will finally have the last piece in place to become the undisputed portable gaming platform. But it goes further than that: Apple has a shot at becoming a bona fide console player -- without actually building a console! With AirPlay and an Apple (i)TV, your iPhone or iPad or iPod touch will push all the pixels you need to enjoy gaming on the big screen. I'm absolutely convinced that the iController (or whatever it ends up being called) is going to happen. It's a no-brainer. Nintendo could've stopped the bleeding by introducing a universal iDevice controller and licensing its API to thousands of developers the world over. Instead, Apple's going to go it alone and pocket every last cent of hardware profit while simultaneously increasing its mobile clout and living-room mindshare. Even the Japanese won't be able to resist! I still hope Nintendo wises up and releases its classic titles on the App Store, and ultimately, it must be just a matter of time. Should Apple pull off the iController concept, Nintendo will have to deal with the same scary reality Sega faced in its post-Dreamcast decline. Or worse. Apple's already taken over mobile gaming and portable gaming. The console market isn't as likely to see Apple on top, but third place is an achievable target, and the weakest link will get pushed right out of the high-definition picture. Nintendo, you can warp to World 8 all you want. Just remember, cloud nine is over here. 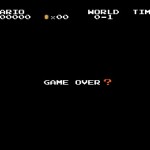 Apple 'iController' Poses Real Threat To Nintendo's Future
Nothing found :(
Try something else