You are using an outdated browser. Please upgrade your browser to improve your experience.
by Bryan M. Wolfe
May 14, 2012
As we wait for Apple’s final word on what the next iPhone will look like, a new concept model has surfaced. Created by the same studio that brought us the Instagram Socialmatic, this iPhone 5 “Plus” concept includes a Liquidmetal body, 4.3” Retina display, A6 Quad Core processor, and more. Designed by Antonio De Rosa, the handset includes a new slim-dock connector, fully capacitive home button, and a rear motion sensor. Finally, the iPhone’s rear camera is now 10.0 megapixels (versus 8.0 megapixels on the iPhone 4S). Full features include: This isn’t the first concept we've seen that utilizes Liquidmetal, the tough material that is rumored to be included on Apple’s sixth handset. Earlier this month, we highlighted No Where Else’s “iPhone LM” concept. Personally, I find the earlier concept much better. Here, the iPhone looks too thin. Besides, Apple will probably not bring us a pico-projector to beam photos and video, at least with this year's handset release. As a reminder, Apple will likely unveil the next iPhone sometime in the next few months. Apple could use next month's Worldwide Developers Conference (WWDC) to announce the next handset. However, the general consensus remains that Apple will wait until fall to make such an announcement. In 2011, the iPhone 4S was released in October. Do you like De Rosa's iPhone "Plus" concept? 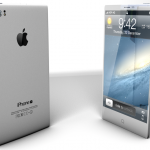 Would You Buy This iPhone?

Would You Buy This iPhone?
Nothing found :(
Try something else