You are using an outdated browser. Please upgrade your browser to improve your experience.
by Juli Clover
June 11, 2012
Every Apple lover’s favorite time of the year has arrived. June 11 marked the first day of the Worldwide Developers Conference, and after weeks of rumors and speculation, we finally found out what Apple had in store for us. Last year, Apple concentrated on iCloud, iOS 5, and OS X Lion. This year, Apple focused on iOS 6, Mountain Lion OS X, and for the first time since 2009, the Cupertino-based company released new Mac updates, making this the most exciting conference in recent years. This post has a rundown on all of our event coverage, but if you want a play by play recap, you can revisit the keynote on our live blog live.appadvice.com or the AppAdvice app. We started off with a recount of the App Store numbers, including more than 650,000 apps in the App Store, 225,000 apps for the iPad, and more than 30 billion app downloads. Read Apple by the numbers.  MacBooks Apple updated its MacBook Pros and MacBook Airs, then surprised us with a next gen MacBook Pro, sporting a Retina display and an incredibly small, streamlined body. Read about the entire refresh of Macbooks. Several Mac apps will be getting Retina updates for the new MacBook Pro, including Aperture, Final Cut Pro, iWork, and iLife. Read about Mac apps going Retina. Play Diablo 3 in high definition on the new Retina MacBook Pro. Read about Diablo 3 in Retina. Mountain Lion Apple announced its upcoming OS X operating system, Mountain Lion. Read about the Mountain Lion features. Messages, which is linked with iMessage, will be coming to the Mac with Mountain Lion. Read more about Messages. Siri won't be coming to the Mac in Mountain Lion. But we did get dictation. Power Nap will automatically refresh data, including emails and notifications, while your new Macbook Air or MacBook Pro is sleeping. Read more about Power Nap. Mountain Lion will have its own notification center with alerts for apps, mail, Twitter, and Messages. Read about Notification Center. Mountain Lion will be integrating with iCloud in a big way, making it easy to share data between apps like Numbers, Pages, Keynote, Text Edit, and more. Read about Documents in the Cloud. Game Center will be coming to the Mac with Mountain Lion. Read about Game Center for Mac. Safari in Mountain Lion will now sync with Safari in iOS, in real time. Read something on your Mac, then pick it back up on the iPhone. Read about Tabs in the Cloud. You can currently display your iPad screen on the TV with AirPlay, and with Mountain Lion, you'll be able to do the same thing from your Mac. Read about AirPlay mirroring for Mac. iOS 6 Siri received some major improvements, and she'll now be able to provide restaurant reservations, sports scores, and movie information. She'll also be able to Tweet, and will be coming to the iPad. Read more about Siri's new tricks. Read more about Siri partners. Siri will be coming to your car in a big way, and Apple plans to team up with several automobile manufacturers to offer enhanced Siri integration. Read about Siri car integration. Mobile Safari will be updated with iCloud tabs, an offline reading list, and the ability to upload photos from Safari to your favorite websites. Read about the new Safari. iFacebook integration in iOS 6. Read more about Facebook and iOS. FaceTime - it's no longer limited to Wi-Fi! Make those video calls over 3G or 4G. Read more about FaceTime enhancement. Passbook - the one stop spot for all your movie tickets, concert tickets, plane boarding passes, and more. Read more on Passbook. Do Not Disturb will keep your phone quiet while you sleep. Learn how you can control your notifications. You'll never forget to make a phone call again with Remind Me Later. Read more about Remind Me Later. Apple's native apps will be updated with iOS 6, with new features for Mail. Read about Mail improvements. New additions to guided access will provide greater accessibility and more parental control options. Read about new Accessibility features. Read about how to share your PhotoStream. The new iOS 6, coming to developers today! Read our full article about iOS 6. Turn-by-turn navigation added to the all new Maps application. Learn more about new navigation. Maps - Now in 3D! Read the new Maps article. Lost Mode, Shared Photo Streams, and VIP Mail. Read about the new Lost Mode. Apple's digital stores may receive facelift. Read about the iOS store's redesign. The Aftermath Apple stock falls following WWDC keynote. Read how Wallstreet hates iOS 6. Do you think Apple could have done better at WWDC? Read our impressions of today's announcements. Ninja update: All new Smart Covers now cover the front and back of your iPad. Read about the redesigned Smart Cases. Apple now streaming WWDC 2012 keynote video. Read here to find a link to the full video of today's event. 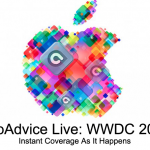 AppAdvice’s WWDC 2012 Link Roundup - Check Here For All Of Our Event Coverage
Nothing found :(
Try something else