You are using an outdated browser. Please upgrade your browser to improve your experience.
by Brent Dirks
July 12, 2012
According to Macgasm, another recently published patent continues to show that Apple is exploring a number of new and different ways for users to charge their devices. Filed last year, the new patent shows how an iPod nano-like device could be charged with its clip, instead of with the quickly aging dock connector.

This isn’t the first patent filed by Apple that covers wireless charging. In late June, an awarded patent detailed a wireless charging system for an iPhone or iPod touch. The system would allow wireless charging by simply placing the device on a specially designed dock with a reradiating antenna and inductive charging circuit. And an intuitive U.K. resident showed that it isn’t all that difficult to bring wireless charging to your iPhone 4S right now. Tanveer Islam, a doctor by day and hardware hacker during his spare time, used some serious electrical engineering skills to make the process work. And it only added a little more than 1 millimeter of thickness to his revved-up handset. I don’t know about you, but I’m definitely ready for an iOS device that doesn’t need wires to charge or sync. Hopefully, Apple will make it a reality soon. Source: Macgasm 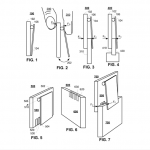 New Patent Shows Another Way We Might Be Charging Our iOS Devices Someday
Nothing found :(
Try something else