You are using an outdated browser. Please upgrade your browser to improve your experience.
by Bryan M. Wolfe
August 2, 2012
The least recognized feature of the current iPod nano is the ability to use it as a wristwatch. Still, the device remains separated from Apple’s iOS universe. However, that could soon change, according to ReadWriteWeb. According to the report, Apple, through iOS 6, could soon make it possible for the iPhone/iPod touch and iPad to communicate with the iPod nano via Bluetooth 4. The result would be to enable “an iPod nano to control, and display messages and other data from, an iPhone or iPad.” For example, your iPod nano could soon display iOS reminders, or give you the weather, courtesy of Apple’s Weather app. Plus, wouldn't it be cool if Siri could send sports scores or movie listings to your wrist? First launched as a replacement for the iPod mini in 2005, the iPod nano has undergone five radical changes, as it shifted from a toned-down iPod to something much more unique. Unlike previous versions, the current iPod nano model includes a multi-touch screen. However, gone are the click-wheel, camera, and video camera of past models. Last year, Apple began pushing the iPod nano as a wristwatch concept, when they released a 1.2 software update. With it, users can now chose from 18 watch face designs, including Disney licensed designs, such as Mickey Mouse and Kermit the Frog. If this rumor is correct, it would be a huge step forward for one of Apple’s most popular non-iOS devices. Plus, it would come at a time when the iWatch concept seems to be going into overdrive. Already, Sony’s SmartWatch has arrived, which communicates with smartphones using Android. And who can forget the Pebble Smartphone watch and the Cookoo? Hopefully, whatever software advances Apple is cooking up for the next iPod nano will be unveiled very soon. As a reminder, Apple is expected to unveil the new iPhone on Sept. 12. At that time, Cupertino will likely refresh their iPod line too. Are you ready to pull a Dick Tracy and buy the next iPod nano? 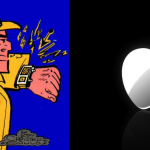 Apple Could Soon Pull A Dick Tracy
Nothing found :(
Try something else