You are using an outdated browser. Please upgrade your browser to improve your experience.
by Brent Dirks
August 14, 2012
Fans of "The Simpsons" rejoice. The iOS game The Simpsons: Tapped Out will be making its triumphant return to the App Store sometime this week, according to Kotaku. And EA says the game will be better than ever, featuring elements from the upcoming 24th season of the long-running animated series:

"Quite honestly, we bit off a bit more than we could chew to start with," EA's Peter Moore said on stage at Gamescom while making the announcement. "D'oh!"

The game first made its appearance in the App Store in late February. Players are tasked with rebuilding Springfield from the ground up and can assign their favorite characters fun tasks. The writers of the series also penned the dialog. But the game was apparently way too popular for its own good. Just a few weeks later, in early March, the game was supposedly pulled from the App Store by EA in order to reduce the strain on its servers. But you would think EA could afford a few more servers, right? The title, when it returns to the App Store, is expected to once again be free to download. As a freemium game, there will be numerous in-app purchase opportunities for those wanting to expand on the experience. Source: Kotaku 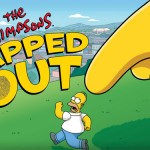 Cowabunga! The Simpsons: Tapped Out Will Return To The App Store Sometime This Week

Cowabunga! The Simpsons: Tapped Out Will Return To The App Store Sometime This Week
Nothing found :(
Try something else