You are using an outdated browser. Please upgrade your browser to improve your experience.
by Joe White
August 2, 2012
It's been something of a drawn-out process, but Apple has finally completely shut down its MobileMe services. Back at the beginning of the month, the Cupertino, Calif. company removed both the MobileMe Gallery and iDisk applications from the App Store, and soon after the email migration from MobileMe to iCloud began. All that remained for Apple to close was iWork.com and, after issuing a number of final warnings, this aspect of the company's now-defunct cloud-based offering also shut its doors for good. Fans need not despair, because in MobileMe's place is iCloud: a free, feature-packed cloud-based service that is embedded within OS X and the iOS. But nevertheless, creatures of habit might be disappointed to see MobileMe make way for the newer service. As MacRumors reports:

As of [August 1], visitors to MobileMe.com are no longer given the option to convert their accounts to iCloud or to retrieve old photos and files, with Apple now simply pointing users to iCloud. Also in line with previous announcements, Apple has officially discontinued its iWork.com service, automatically redirecting visitors to the main Apple home page. While the service was to officially shut down as of the end of the day yesterday, it did continue to function until just a short time ago.

It would appear that any remaining documents housed at iWork.com are now gone, meaning it's bad news for those of you who didn't heed our warning and download files before it was too late. For information on iCloud, check out our post on the service's top 10 features. Source: MacRumors 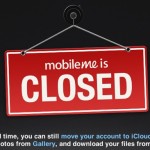 Farewell MobileMe, We Hardly Knew Ye: MobileMe, iWork.com Close For Good
Nothing found :(
Try something else