You are using an outdated browser. Please upgrade your browser to improve your experience.
by Joe White
August 5, 2012
Sprint looks to be retailing the iPhone 4S, Apple's fifth-gen handset, for a $50 discount at $149.99 (for the 16 gigabyte handset). Furthermore, according to iDownloadBlog, this new pricing will be around until September 14. Anyone willing to guess what might alter the carrier's iPhone pricing around this date? That's right: the sixth-generation iPhone, which is expected to be announced on September 12, with the all-new iPhone launching in the USA on September 21. If iDownloadBlog's source ("a Sprint retailer") is indeed correct, it would appear that America's third-largest iPhone carrier will further reduce its iPhone 4S pricing once the sixth-gen handset has been unveiled to the world. It also looks like the rumors regarding a mid-September announcement could be true. As iDownloadBlog reports:

From what we hear, this move is aimed at clearing up large inventories of iPhone 4S 16GB that Sprint committed to purchase from Apple, when it hoped it would generate sales as impressive as its competitors.

The sixth-generation iPhone handset is expected to sport a thinner, lighter design, a larger screen, and a smaller dock connector, along with a possible NFC chip. But that's not all the Cupertino, Calif. company's fall event could hold. Numerous reports have also pointed towards the coming launch of a small-size tablet, dubbed the "iPad mini," which will offer users a taste of the iPad experience for a fraction - or rather for around half - of the price. It looks like Apple fans have a lot to look forward to in September. For more information on the $149.99 iPhone 4S, head over to Sprint's website. Source: Sprint Via: iDownloadBlog 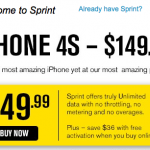 Ready For The Sixth-Gen iPhone? It Looks Like Sprint Is

Ready For The Sixth-Gen iPhone? It Looks Like Sprint Is
Nothing found :(
Try something else