You are using an outdated browser. Please upgrade your browser to improve your experience.
by A.T. Faust III
August 13, 2012
Nobody's completely sure what the new iPhone will look like, but evidence is stacking up soundly that the handset will indeed be a 4-inch Retina device with a 640x1136 resolution and an industrial design language predominantly lifted from its immediate forbears. In fact, aside from size, one of the only aesthetic differences between the expected upcoming model and the previous two iterations of iPhone is the curious, two-tone rear panel seen on various "leaked" next generation shells. However, while the eye-catching, brushed aluminum backside fits nicely with Jony Ive's established design cues, there's perhaps more to this look than just the look. In layman's terms, says Don Lehman, the uniquely constructed panel -- which is a single piece of aluminum carved out via CNC (you can see the telltale machining striations in the image below) -- could offer a literal window into the new iPhone's inner workings. However, even though the leaked model touts an industry-first unibody design, it still needs to accommodate the pair of auto-switching, edge-bound antennas like those found on the iPhone 4S. This requires a gap in the banding, and it's why the unibody backplate doesn't completely encircle the handset. It's also why you see what appears to be a pair of Gorilla Glass or plastic panels at the top and bottom of the device. The neat thing, though, is that these are also functional in nature, as they comprise a transmission-friendly material through which non-cellular signals may pass, such Wi-Fi, GPS, Bluetooth, and possibly even NFC. While I'm not too fond of the design's altered aspect ratio, (heck of a) hoax or not, I certainly appreciate its high level of engineering and overall attention to detail. Man, I can't wait for September 12! Source: The Tech Block Via: Cult of Mac 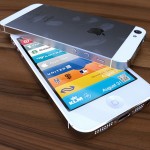 Rumored iPhone's Two-Tone Backside Isn't All About Appearances
Nothing found :(
Try something else