You are using an outdated browser. Please upgrade your browser to improve your experience.
by Joe White
August 7, 2012
Apple released iOS 6 beta 4 to developers yesterday, later confirming that the built-in YouTube app is no longer going to be a part of the company's mobile operating system (apparently, Google is working on its own YouTube app which should be available sometime in the future). Furthermore, a new safety warning now appears when users are rocking iOS 6's turn-by-turn navigation feature in the all-new Apple-powered Maps app. But if you thought this was all iOS 6 beta 4 had to offer, think again: in addition to the above, the fourth beta release of iOS 6 also includes a new, mysterious "Bluetooth Sharing" option in the "Privacy" section of the Settings app. The new section of the Settings app lists iOS applications that have requested to share via Bluetooth Sharing, though, as of this moment, none of us are sure exactly what "Bluetooth Sharing" could be. Last week, iLounge noted that Apple would launch a new Bluetooth-powered bridging feature in iOS 6:

Our source also claimed that Apple is working on an as-yet-undisclosed iOS 6 feature that will act as a bridge between its Bluetooth 4-capable devices. The feature would enable, say, a future iPod nano to display iMessages received by an iPhone, record voice memos that could be shared via the iPhone, and even initiate phone calls through its own headphones.

Could this be Bluetooth Sharing? As of yet, nobody can be entirely sure. If you're a registered developer, iOS 6 beta 4 is now available to download as an over-the-air update. For jailbreak developers looking to ready their jailbreak tweaks for the final version of iOS 6, redsn0w 0.9.13dev3 is already compatible with this fourth beta release. Source: iDownloadBlog 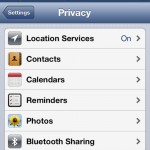 Mysterious 'Bluetooth Sharing' Feature Appears In iOS 6 Beta 4
Nothing found :(
Try something else