You are using an outdated browser. Please upgrade your browser to improve your experience.
by Bryan M. Wolfe
August 31, 2012
A new photo is lurking around the blogosphere that apparently shows the next iPhone alongside an iPhone 4S/4, and iPhone 3GS/3G. The photo, which we’ve published here, was first reported by NoWhereElse, the French site that has "leaked" other iPhone photos in recent weeks. As you can see, the “iPhone 5,” as NoWhereElse calls it, is a little bit taller than the iPhone 4S/4. If anything, the model looks a lot like it could be the 4’s slightly taller, and thinner brother. Assuming this photo is real, and we aren’t sure that it is, it would match up pretty nicely with previous iPhone rumors. Earlier this month, NoWhereElse published photos reportedly showing the iPhone's new dock connector, as well as other internal parts. For further reading, be sure to check out our report, Everything You Need To Know About Apple's Next Handset. Source: NoWhereElse Photo: New iPhone rendering by Blackpool Creative, top 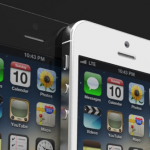 Thin Is In As New iPhone Photo Is Leaked
Nothing found :(
Try something else