You are using an outdated browser. Please upgrade your browser to improve your experience.
by Brent Dirks
August 14, 2012
A patent recently awarded to Apple shows first hand the technology that may bring a thinner and lighter touchscreen to the next-generation iPhone. According to AppleInsider, the patent details an in-cell touch design that combines the LCD and touch recognition part of the screen into one layer instead of two separate parts. The patent, originally filed more than five years ago in 2007, spells out some of the benefits of the technology:

By integrating the layered structure of an LCD and a touch sensor, a variety of benefits can be achieved. This integration can include combining or interleaving the layered structures described above. Integration can further include eliminating redundant structures and/or finding dual purposes (e.g., one purpose for the touch function and another for the display function) for particular layers or structures. This can permit some layers to be eliminated, which can reduce cost and thickness of the touch screen LCD, as well as simplify manufacturing.

Word of in-cell technology possibly being part of the new iPhone came as early as April in a report from Digitimes. Just a few days later, an analyst said the process could easily shave off 0.44mm from the new handset. And speculation earlier this month said that the new iPhone may easily be almost 20 percent thinner than the current iPhone 4S that measures 9.3mm thick. As of now, the next-generation handset (whatever it will be called) is expected to be introduced at an event Wednesday, Sept. 12 in San Francisco and be available for sale on Friday, Sept. 21. Source: AppleInsider 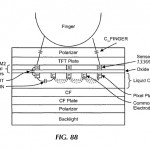 Thin Is In: New Patent Details Touchscreen Technology That May Appear In Next-Generation iPhone

Thin Is In: New Patent Details Touchscreen Technology That May Appear In Next-Generation iPhone
Nothing found :(
Try something else