You are using an outdated browser. Please upgrade your browser to improve your experience.
by Bryan M. Wolfe
September 4, 2012
For the first time since June 2010, Apple is set to reveal an iPhone that looks quite different than the previous two models. Because of this, expect sales for the sixth generation handset to perhaps exceed 10 million units in the first week, according to Piper Jaffray analyst Gene Munster, as reported by AppleInsider. Following Apple’s announcement that their fall event would be held on Wednesday, Sept. 12, Munster released a new report to investors. In it, the analyst suggests Apple’s iPhone sales in the current quarter could exceed Wall Street expectations. According to the report, most expect Apple to report sales of between 22 million and 23 million iPhones in the September quarter. However, because Apple is expected to get the new iPhone to market before the end of the month, those expectations will probably be pushed higher. Munster thinks that iPhone sales could reach 28 million units for the quarter, with 6 million to 10 million units being sold during the final month of September alone. The next iPhone is likely to go on sale in the United States, and in other countries on Friday, Sept. 21, with preorders starting on Sept. 12. Meanwhile, just to prove that the silly rumor season continues despite Apple's announcement, iphonenieuwsblog.nl has published a photo reportedly showing boxes for "the new iPhone" coming off an assembly line. As you can see, the photo does include the iOS 6 logo. However, it also includes an icon for the native YouTube app, which Apple killed off earlier this summer. We're pretty confident that this photo is bogus, because we don't believe Apple would call their next handset "the new iPhone," at least on the box. After all, the new iPad, which launched earlier this year simply says "iPad" on its box. Besides, Apple's invitation, which we've included here clearly suggests that the sixth generation model will, in fact, be called the "iPhone 5." As a reminder, Apple's fall event will begin on Sept. 12 at 10 a.m. PDT from the Yerba Buena Center for the Arts in San Francisco, Calif. AppAdvice will be there and provide live coverage of the event. Source: AppleInsider Photo:  iphonenieuwsblog.nl 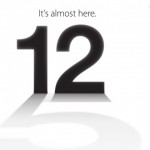 As Bogus Photo Surfaces, New iPhone Sales Could Top 10 Million Units In First Week
Nothing found :(
Try something else