You are using an outdated browser. Please upgrade your browser to improve your experience.
by Joe White
September 15, 2012
Folks had originally thought that AT&T would hit customers with additional charges when FaceTime calls were made over a cellular data network in iOS 6. Now, it seems as if AT&T isn't going to apply charges for FaceTime over cellular, but iOS 6-powered iDevice owners are going to need to be hooked-up to one of the carrier's Mobile Share data plans. In a statement released by AT&T, the network noted:

AT&T will offer FaceTime over Cellular as an added benefit of our new Mobile Share data plans, which were created to meet customers’ growing data needs at a great value. With Mobile Share, the more data you use, the more you save. FaceTime will continue to be available over Wi-Fi for all our customers.

As Cult of Mac elaborates:

The new Mobile Share plans will be made available on August 23rd, and customers aren’t being forced to upgrade. However, AT&T is obviously trying to get everyone off the single plans and onto shared data. This puts the current plan holders (especially the grandfathered unlimited data iPhone customers) between a rock and a hard place.

Though Verizon hasn't yet announced plans for FaceTime over cellular, Sprint has noted that it doesn't plan on charging customers extra for using the service. As a reminder, iOS 6 is set to launch on September 19. Excited? Source: Cult of Mac 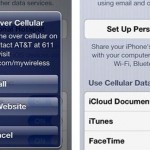 AT&T Doesn't Plan To Charge For FaceTime Over Cellular, But You'll Need A New Plan

AT&T Doesn't Plan To Charge For FaceTime Over Cellular, But You'll Need A New Plan
Nothing found :(
Try something else