You are using an outdated browser. Please upgrade your browser to improve your experience.
by Brent Dirks
September 26, 2012
While we’ve recently reported on the unique technology behind Apple’s Lightning cable and companion chip in the iPhone 5, AppleInsider indicates that third-party manufacturers in China are still trying to create copies. Peter Bradstock from Double Helix Cables told the site that Chinese manufacturers intend to start cloning the chip a little later this month. Even so, he said it would be two months before any cloned products could actually be produced:

"People should be very surprised if this cable can be cloned by Christmas," Peter told AppleInsider. "This is a serious undertaking and the Chinese know it."

Soon after Apple announced the iPhone 5 with the new connector, third-party manufacturers began selling their versions of the cables and adapters through Amazon and eBay for much lower prices than the official versions. But Bradstock said he doesn’t believe it’s possible that there are currently any working cables from third parties. At the heart of the Lightning cable is an authentication chip located between the V+ contact of the USB connector and the power pin on the new plug. Apparently, any working cables must have that chip. A special chip in the iPhone 5 helps to dynamically assign the pins of the cable depending on which way it is inserted. So as of now, Apple is the only supplier of the cable. Apple's online store is quoting ship times of 1-2 weeks for the $19 Lightning to USB cable. But it does seem to be in stock at many Apple Stores. The $29 and $39 Lightning to 30-pin dock adapters are listed as shipping in October. Source: AppleInsider 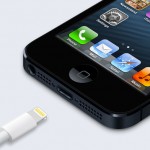 Chinese Hard At Work Trying To Crack Lightning Cable, Chip
Nothing found :(
Try something else