You are using an outdated browser. Please upgrade your browser to improve your experience.
by Brent Dirks
September 26, 2012
Well, it looks like there might be a stand-alone Google Maps app for iOS 6 in the cards after all. According to The New York Times, Google is indeed working on its own app for both the iPhone and iPad, but it will be the end of the year before the work is finished. But while Google was able to quickly put together a YouTube app after Apple pulled the native version in iOS 6, the situation looks to be a little more tricky with Maps. The first issue was that Google didn’t see Apple's decision coming. As we reported last night, Apple and Google had more than a year left on a contract when Apple decided to go in its own direction. So Google has been playing catch up. And there seems be another multi-dimensional issue:

Another complication, according to a person with knowledge of Google Maps: Google would likely prefer to release a maps app that includes 3-D imagery so it is comparable to Apple's. But Google has 3-D images in Google Earth, which is a separate app with a separate code base from Google Maps, so it would take some time to combine the two.

But today’s news at least is a glimmer of hope for users. On Monday, Google’s own Eric Schmidt intimated that stand-alone Google maps app might never hit iOS. If you’re dissatisfied with Apple’s Maps, check out these alternative turn-by-turn apps. Source: The New York Times 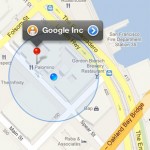 Google Is Actually Working On Maps For iOS 6

Google Is Actually Working On Maps For iOS 6
Nothing found :(
Try something else