You are using an outdated browser. Please upgrade your browser to improve your experience.
by Lory Gil
September 13, 2012
Do you “Ping?” Do you even know what that means? Of course you do. We all remember when Apple announced that it would be launching a social networking service for iTunes. We were so excited when we imagined how fun it would be to share our musical likes and dislikes with friends with just the click of a button. Once Ping was incorporated into our music library, it became a nuisance that we just wanted to turn off. Now, thanks to some help from the most popular social networking site on the planet, Ping is no more and Facebook is the new kid on the iTunes block. Yesterday’s big announcement by Apple left us spinning with excitement. As the dust settles, we are finding out more about what all the changes mean. When Facebook CEO Mark Zuckerberg took the stage to tell us the many ways in which the website would integrate with iTunes 11, we didn’t even think about the fact that Apple would be putting Ping to pasture at the same time. If you’ve never signed up for Apple’s soon-to-be forgotten social experiment, you are out of luck. If you try to access Ping, you will receive a message that reads, “Ping will no longer be available as of September 30.” Once Facebook’s deep integration sets in, users will be able to “Like” and “Share” music, podcasts, books, and apps. Everything in the iTunes store will be embedded with Facebook’s social connection. This is great news for developers since it is nearly impossible to get noticed among 700,000 competing apps. Apple plans to release iTunes 11 in late October, well after we’ve purchase our new iPhone and upgraded our operating systems to iOS 6. Facebook integration with iTunes will just be the icing on the sweet treat that is our mobile devices. Via: The Register 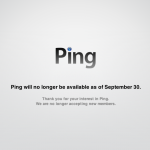 Ping Will Soon Be Nothing More Than A Distant Memory

Ping Will Soon Be Nothing More Than A Distant Memory
Nothing found :(
Try something else