You are using an outdated browser. Please upgrade your browser to improve your experience.
by Joe White
September 2, 2012
All of us are expecting Apple's sixth-gen iPhone to look markedly different from its fifth-gen predecessor. Most speculate that a (super beneficial) four-inch screen will be included in the smartphone, while folks have also suggested that upcoming handset might also feature a small-size dock connector. Now, a new rumor (plus video) is indicating that the all-new iPhone, which Apple should announce sometime this month, will also launch with a pair of redesigned earphones, which are depicted in the above image. A Vietnamese website, Tinhte.vn, originally posted a hands-on video of the purported sixth-gen earphones (via MacRumors). A translation of the video is included below:

In my hands are the new earphones for the iPhone 5 that is about to come out - Apple's next generation of iPod [sic]. These will replace the current earphones that are on the market. These are manufactured at Phax Co factory in Vietnam. They have the appearance of a horse's head, not like earbuds. When they are worn, they have a much smaller profile. They have the appearance of a fully integrated, single unit - there's no part that looks like it would come apart - not like earbuds; the integrated design is characteristic of Apple products. Here I have the old earphones for comparison. The new ones are much smaller; when they are worn, they do not hurt the way earbuds do. You can see on the old ones the surface is a separate part that looks like it can be detached - not like the small surface of the new one. The old earphones were mostly made in China, with some in Vietnam. But the new ones are clearly made in Vietnam. (Reading from the wires): "Designed by Apple in California, assembled in Vietnam."

The website claims that these new earphones are being assembled at a Foxconn plant in Vietnam. And if you still feel sceptical, MacRumors notes that Tinhte.vn has managed to get hold of Apple prototypes in the past. Apple is expected to announce the sixth-generation iPhone on September 12, though as of yet, nobody has seen invitations for the anticipated event appear. If any more news hits the Web regarding the forthcoming handset, we'll be sure to let you know. In the meantime, check out the below video of the purported sixth-gen iPhone earphones. 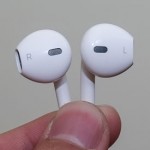 Redesigned iPhone To Launch With Redesigned Earphones?
Nothing found :(
Try something else