You are using an outdated browser. Please upgrade your browser to improve your experience.
by Bryan M. Wolfe
October 16, 2012
Next week, Apple is widely expected to unveil the “iPad Mini.” When they do, it will likely come in 12 different models in two colors, according to AppleInsider. The report contends that the company may launch the compact tablet in Wi-Fi only, 3G, and 4G LTE models. These are defined as “good,” “better,” and “best” according to “presumed ‘iPad Mini’ product SKUs.” A previous report suggested that Apple would only release a Wi-Fi model. Additionally, “one person familiar” with Apple’s product inventory said that the company’s initial shipments would be heavily skewed towards the entry-level iPad Mini. This 8GB model would be priced at around $249. Were Apple to release 12 iPad Mini models, it seems likely they would include three of the following: 8GB, 16GB, 32GB, and 64GB. Both would be available in black and white models. Also likely at next week’s event is a new 13-inch Macbook Pro with Retina display, a new Mac mini, and more. Apple is expected to officially announce their Oct. 23 event later today, according to this report. As per usual, we’ll let you know. Source: AppleInsider Photo: iPad Mini rendering, Martin Hajek 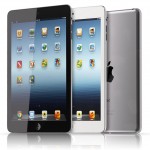 Apple Planning To Release 12 Different 'iPad Mini' Models In Two Colors
Nothing found :(
Try something else