You are using an outdated browser. Please upgrade your browser to improve your experience.
by Aldrin Calimlim
November 3, 2012
Concurrent with the official launch of the new device, Apple has begun airing a new TV ad for the new iPad mini. The new ad, which debuted during Apple's keynote presentation for the company's media event last month, is simply titled "Piano." Unlike the majority of Apple's ads, "Piano" is not accompanied by a voiceover track. Instead, the new ad simply features a full-sized iPad and an iPad mini both running GarageBand. In the ad, the two devices are used to play the popular piano duet-friendly song "Heart and Soul." If you can't see the video embedded above, please click here. The ad begins with the full-sized iPad playing one half of the piano duet. But soon it is joined by the iPad mini for the other half. And this being an ad for the iPad mini, the spotlight, so to speak, is promptly stolen by the smaller device. This is hands down one of my favorite Apple ads — not least because I find it rather clever that a song which is largely known for the Tom Hanks movie "Big" is used to advertise a "mini" product. 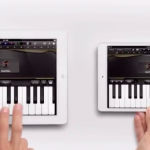