You are using an outdated browser. Please upgrade your browser to improve your experience.
by Brent Dirks
November 8, 2012
While the idea of an Apple-powered watch suffered an inauspicious death with the introduction of the seventh-generation iPod nano earlier this fall, some fans are still clamoring for such a device. I just hope it isn’t as horrible as this concept video from CiccareseDesign first spotted by 9to5Mac. CiccareseDesign has previously come up with concepts like the absolutely awesome curved iPhone 5 earlier this year. But this latest project is not exactly in the same league. Click here if you can’t see the video. On the CiccareseDesign site, a simple description of the concept is included with a few photos:

I am very proud of this new project, it opens the way for a new type of technology. On the move, in the car, on a walk we want to control our iPhone with the voice and we want it responds without removing it from the pocket. The answer to this need is iSiri…. This is a wearable device that connects via bluetooth to iPhone. It captures the functions that Siri can control.

That’s all good, but who in the world would want a watch that doesn't tell the damn time? You can control Siri right now without removing an iPhone from your pocket – it’s called a Bluetooth headset. The future is now! But seriously, what do you think an Apple-designed watch should be like? I think Pebble that rocketed to Kickstarter fame earlier this year would be a great start as the jumping-off point for an iWatch. Now what are the chances it could use Google Search instead? Via: 9to5Mac [gallery link="file"] 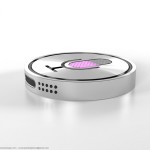 I Hope Apple Can Design A Better Siri-Enabled Watch Than This
Nothing found :(
Try something else