You are using an outdated browser. Please upgrade your browser to improve your experience.
by Aldrin Calimlim
February 8, 2013
Given its established pattern of annually upgrading its bestselling smartphone, Apple is widely expected to release the iPhone 5S this year. But recent rumors have been claiming that Apple is also set to release another new iPhone model this year. And the latest of such rumors comes from Chinese mobile phone information site Laoyaoba.com. Translating the relevant post on the site's microblog, investment news service BrightWire notes that a source told Laoyaoba.com that he has seen the iPhone 5S and the so-called iPhone 6 at Apple's suppliers. The iPhone 5S is said to resemble the iPhone 5 (no surprise there), while the iPhone 6 is a lighter and thinner 5-inch handset. Both models may be released within the year. This new rumor corroborates previous rumors that began surfacing last month. Of particular interest is the early release of the iPhone 6, which has been varyingly referred to as either iPhone Math or iPhone Plus. Apple apparently decided on the iPhone 5's 4-inch screen on account of its being "a dazzling display of common sense." But the upcoming release, if and when, of an even larger iPhone is now believed to be a sensible way for Apple to "regain its mojo." Source: Laoyaoba.com on Sina Weibo Via: BrightWire 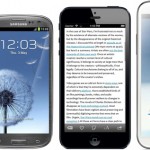 The Time For An 'iPhone Plus' Could Soon Arrive

The AppAdvice Week In Review: Super Bowl Sunday Edition
Nothing found :(
Try something else