You are using an outdated browser. Please upgrade your browser to improve your experience.
by Aldrin Calimlim
February 7, 2013
Shortly after the release of evasi0n a couple of days ago, it was discovered that the much awaited iOS 6 untethered jailbreak was causing the stock Weather app to crash on jailbroken iPhones. Also, it was found that evasi0n was causing long reboot times. Fortunately, both issues have now been resolved thanks to a newly released remedial patch in the popular Cydia app store for jailbreakers. Sure, a manual method for getting rid of the Weather app bug had already been suggested. But why bother with that fix, which requires some code manipulation, when there's now a decidedly hassle-free solution? A solution that not only solves the Weather app issue but also the long reboot time issue. As @planetbeing, one of the members of the evasi0n hacking team called evad3rs, announced on Twitter today, the solution is now available in Cydia through an update to the Untether and UIKit Tools packages. Just go to Cydia on your jailbroken iPhone and tap the Changes tab. You should then see upgrades for the aforementioned packages. If you haven't jailbroken your device yet but are intent on taking advantage of evasi0n, you're in luck. A new version of the iOS 6 untethered jailbreak, evasi0n 1.1, has also been released to include the latest fixes. But as clarified by @planetbeing, those who have already jailbroken their devices with the original version of evasi0n need not download evasi0n 1.1. "There is nothing in evasi0n 1.1 that is not already in Cydia," notes the evad3rs member. Source: @planetbeing Via: Cult of Mac 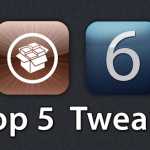 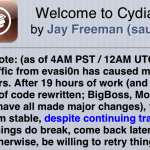 Evasi0n Download Statistics Prove That The Jailbreak Community Is Alive And Well
Nothing found :(
Try something else