You are using an outdated browser. Please upgrade your browser to improve your experience.
by Brent Dirks
February 25, 2013
It was fun while it lasted. One evasi0n creator has confirmed to Forbes that iOS 6.1.3 beta 2, which was released last week, does kill the popular jailbreaking method. David Wang took a closer look at the new software over the weekend and said that the update patches at least one of the five exploits used in the jailbreak. Since the flaw in the time zone settings is fixed, it’s highly doubtful that evasi0n can be used with any updated or new devices:

"If one of the vulnerabilities doesn't work, evasi0n doesn't work," he says. "We could replace that part with a different vulnerability, but [Apple] will probably fix most if not all of the bugs we've used when 6.1.3 comes out."

Released earlier this month, the untethered evasi0n jailbreak can be used on recent versions of the iPhone, iPod touch, iPad, and iPad mini. Just four days after it was released, it was installed by more than 7 million users, making it the most popular jailbreaking method ever. Since iOS 6.1.3 is still being tested by developers, it will be at least a few weeks before the update is officially released to the public. But the jailbreakers won’t be calling it a day:

When Apple’s update arrives, the team of jailbreakers known as the evad3rs may still have more tricks in store. Wang tells me that the group has discovered enough bugs in Apple’s mobile operating system to nearly build a new iOS jailbreak even if all the bugs they currently use are fixed. But then again, Wang says he hasn’t yet been able to check Apple’s patch for every bug it might fix–either the ones evasi0n employs or those he and his fellow hackers had hoped to keep secret for their next jailbreak. “If they patch most of the bugs,” Wang says, “Then we’re starting from scratch.” 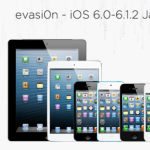 Having Boot-Up Time Issues With Your Jailbroken Device? Check Out evasi0n 1.5 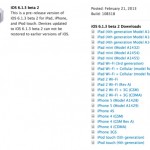