You are using an outdated browser. Please upgrade your browser to improve your experience.
by Joe White
April 18, 2013
KGI Securities analyst Ming-Chi Kuo recently published a research note on the iPad 5, in which Apple's fifth-generation 9.7 inch tablet is predicted to be 15 percent thinner, and 25 percent lighter. In the publication, obtained by MacRumors, the analyst explains:

We think the tablet will, at 7.5-8.0mm, be 15% thinner than iPad 4. The new device will likely be about 500 grams, or some 25% lighter than iPad 4, run on an A7X processor, and sport cameras with similar specs to the iPad 4’s (front HD, rear 5MP). The casing shape and color (silver and black) and narrow bezel design will be similar to the iPad mini’s.

This isn't the first time we've heard that the forthcoming 9.7 inch iPad could feature a narrower bezel. In fact, following the launch of the iPad mini, numerous reports have suggested that Apple's larger tablet could borrow from the design of its smaller counterpart in this capacity. Such speculation resulted in the iPad 5 rendering reproduced at the head of this article. In the image, the current iPad, the imagined fifth-gen iPad, and the iPad mini are shown alongside one another. Ming-Chi Kuo continues:

Ultimately, the analyst envisages that more efficient technology will allow Apple to reduce the battery size of the iPad 5, thereby allowing for a lighter tablet. This is expected to combine with a thinner display, made possible by the same GF2 technology used in the iPad mini, in order to produce a fifth-gen iPad that is lighter, thinner, and easier to hold and use. How do you like the sound of Ming-Chi Kuo's predictions? 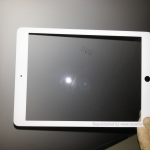 The Next iPad: The iPad mini Only Larger 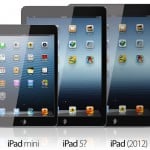 Confusion Grows On When Apple Will Launch The Next iPad
Nothing found :(
Try something else