You are using an outdated browser. Please upgrade your browser to improve your experience.
by Joe White
May 30, 2013
Tapbots' Tweetbot for Mac, the popular alternative to Twitter's own OS X application, has received an update to version 1.3. Now, users can access a media timeline similar to that of the iOS application from within the Mac app, making it easier to view pictures, videos, and more alongside Tweetbot's slick interface. In addition, a number of bug fixes and minor optimizations have also been made to the $19.99 application. Once the update has been installed, users can access Tweetbot's media timeline by pressing ⌘F on their Mac's keyboard, or by accessing "Media Timeline" from within the "View" menu. As you can see in the above image, the Mac application's media timeline displays media in full, as in Tweetbot's iOS app. The effect is great, and compliments Tweetbot for Mac well. Further changes made in Tweetbot 1.3 include: As mentioned, Tweetbot for Mac is available to download in the Mac App Store for $19.99, and requires OS X 10.7.4 or later. Take a look at the recently updated application now, or for further app news, see: Official Google Play Music All Access App Coming Soon To iOS, Updated: Star Wars: Knights Of The Old Republic Is Now Live, and The New York Times Updates Its Mobile Website For First Time In Seven Years. 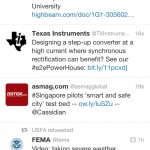