You are using an outdated browser. Please upgrade your browser to improve your experience.
by Joe White
June 17, 2013
One of the first images of a "Made for iPhone" controller has surfaced online, which appears specifically to depict a third-party gamepad manufactured by Logitech. Apple is indeed adding support for third-party controllers in iOS 7, and as such countless iPhone-compatible gamepads are sure to arrive on Apple Store shelves before the end of the year. The above image reached us from Kotaku, who explains:

Can't tell you who gave it to us or where it was seen, but we can vouch for this image's authenticity. The controller is large enough to fit an iPhone 5.

This will, we assume, be one of many controllers to appear for the iPhone, though Logitech's forthcoming product does give us a better idea of what we can expect later in the year. As you can see, a D-pad on the left of the accessory is accompanied by four buttons (plus an option button) on the right-hand side, and is reminiscent of handheld consoles such as the Nintendo DS or PS Vita. With Apple's iDevices already constituting some of the most popular handheld gaming consoles in the world, it's clear that the availability of "Made for iPhone" gamepads is only going to further encourage portable gamers to use an iDevice for on the go gaming, instead. We'll keep you updated with further information as we receive it. In the meantime, see: Apple's iOS 7 GUI PSD File Now Available To Download Online, The AppAdvice Week In Review: WWDC, iOS 7, OS X Mavericks, Mac Pro And More, and How To Emulate iOS 7 Running On An iPad In Developer-Only Xcode 5. 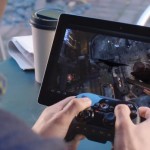 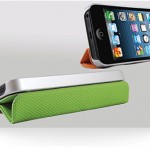