You are using an outdated browser. Please upgrade your browser to improve your experience.
by Bryan M. Wolfe
June 25, 2013
The next version of iOS 7 doesn’t arrive for the public until this fall. However, developers are already giving us quite a bit of insight on what new enhancements Apple’s next operating system includes. Today we continue our series of reports on some of the changes coming to the iPhone/iPod touch and iPad.

Music and the lock screen

Our focus today is on music and how you control it in iOS 7. Whether it comes from the native Music app, or one of the many third-party apps, music plays a central role in iOS 7. When a song is playing, you can control it from the lock screen. Available tools include: pause/play, forward/back, and volume control. Each song is identified by title, album, and includes artwork. Similar tools are available on the new Control Center, minus the artwork, of course. Unlike in the first iOS 7 beta, the music controls are no longer on the lock screen when a song isn’t playing. This happened when you double pressed the home button. Now, the only ways to begin playing a song again from the lock screen is by going into the Control Center and hitting the play button, or by unlocking the device. That’s it for today, folks. We’ll be offering other iOS 7 quick picks in the coming weeks. Stay tuned. In the meantime, see: Hands-On Video: The Return Of Apple's Voice Memos App Is Making Waves In iOS 7, Want To Add HDR To The iPad's Camera App? Download iOS 7 This Fall, and Full Walkthrough: Apple's iOS 7 Beta 2 Running On The iPad. 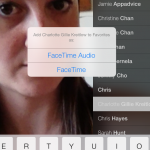 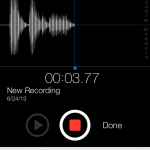 Hands-On Video: The Return Of Apple's Voice Memos App Is Making Waves In iOS 7
Nothing found :(
Try something else