You are using an outdated browser. Please upgrade your browser to improve your experience.
by Bryan M. Wolfe
July 1, 2013
We’ve heard plenty of rumors concerning the so-called budget iPhone in recent days. Most of these reports have focused on the design of the “iPhone mini.” Now, a Chinese tech blog says that Foxconn has already started to ship the new phone to Apple. Citing an inside source at Foxconn, Lieyunwang says that the first budget iPhone units have shipped for a fall release. This is in line with a report earlier this year in The Wall Street Journal that stated the iPhone mini would launch during the second half of this year. Earlier today, new photos leaked that apparently show the budget iPhone. As Joe White noted, the images, first spotted by Nowhereelse.fr, consist of three photographs showing only the rear shell of the low-cost iPhone. One of those images is shown above. As White explained:

The exhibited iPhone shells echo previous reports indicating that Apple’s “budget” smartphone will be available in different colors. Though besides the pictured yellow, pink, and lime green, we’ve also heard that a black colored low-cost iPhone could also be in development.

The iPhone mini is expected to launch along with the so-called “iPhone 5S” sometime between August and October. For more information, see: New Renderings Suggest That Apple's Budget iPhone Won't Be Cheap, and Case Makers Are Gambling That Their Designs Match Those Of Apple.

The Next iPhone Could Be Super Fast, Support LTE-A 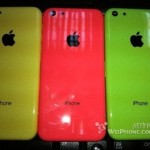 Could Apple's Low-Cost iPhone Look Like This?
Nothing found :(
Try something else