You are using an outdated browser. Please upgrade your browser to improve your experience.
by Brent Dirks
July 11, 2013
In an interesting and wide-ranging update to Kickstarter backers, Pebble’s Eric Migicovsky for the first time disclosed order numbers for the smart watch while also promising a big improvement for iOS users. After Kickstarter backers ordered approximately 85,000 watches, the company has also received 190,000 preorders through its website. Just last Sunday, the smart watch officially made its way to Best Buy retail locations and online. Migicovsky said the most recent version of the Pebble software for iOS devices, version 1.1, smashes an annoying pop-up asking to “Ignore or allow communication with Pebble.” He also promised a major new feature soon:

A major new feature on iOS will be available within 2-3 weeks. The feature has been lacking since launch: support for email notifications. At first, our testing with iOS 6 indicated that the built-in Bluetooth notification system would be able to send notifications Pebble. Unfortunately, that system only could reliably send SMS and iMessage to Pebble (ironically something we did not promise to support). We’ve finally cracked the email puzzle and the next Pebble iOS app will have full support for Gmail and IMAP email notifications.

As far as iOS 7, and its improved compatibility with Bluetooth devices like the Pebble, Migicovsky only said that the next-generation of iOS “looks cool and interesting,” but that the company can’t talk about its plans until Apple officially releases the software. Thankfully, Pebble owners can now also purchase a replacement charging cable directly from the company’s website for $10. Worldwide shipping is included. 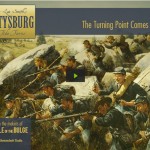 Gettysburg: The Tide Turns Looks Like A Fantastic Hex-Based Wargame
Nothing found :(
Try something else